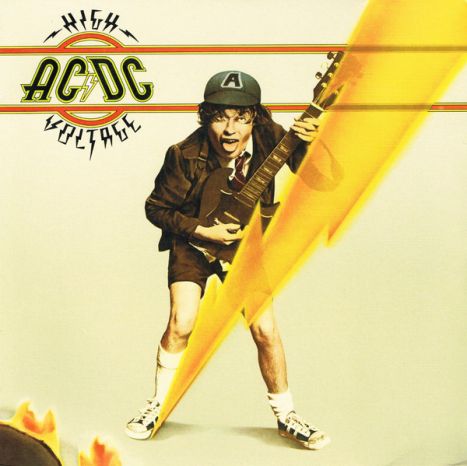 Issued in a single sleeve with colour printed inner sleeve with liner notes, images and credits.

On back cover:
[...]
Produced by Vanda Young for Albert Productions at Albert Studios, Sydney, Australia.

On back cover:
[...]
Produced by Vanda Young for Albert Productions at Albert Studios, Sydney, Australia.

T.N.T
Can I Sit Next To You Girl
Little Lover
She's Got Balls
High Voltage


Anyway, "High Voltage" is really a compilation of the group's first two Australian albums and it's one of the essential AC/DC recordings of the Bon Scott era. The essence of "High Voltage" and AC/DC is pretty much summed up in the infectious "Rock and Roll Singer," which is nothing more than a carefree tribute to having a good time and dodging responsibility. Other highlights are "TNT" the bluesy drive of "The Jack," and the excellent "Live Wire." The production has a somewhat raw and bluesy feel; it sounds like the band recorded the album right in your own living room. "High Voltage"

AC/DC was still developing its sound when High Voltage was recorded in November 1974, and Scott and the Young brothers were backed by a different rhythm section than the Mark Evans/Phil Rudd combination featured on their next three full-length studio recordings. The resulting album offered more of a glam rock-influenced sound than the hard-edged, rhythm & blues-based rock 'n' roll for which AC/DC would become famous.