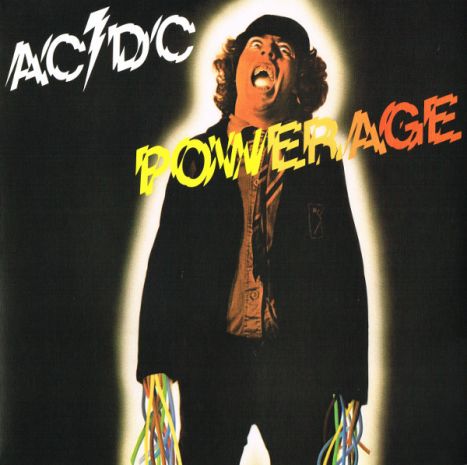 
AC/DC: Malcolm Young, Angus Young, Bon Scott, Cliff Williams, Phil Rudd.
Recording information: 1978.
With AC/DC's third release, POWERAGE, the band was dispensing even heftier ammo from their hook-laden cartridge belt. With the rock-steady rhythm section pounding out 4/4 beats as if it were overtaking a small country, guitarists (and brothers) Angus and Malcolm Young trade towering riffs that belie their pint-sized physical stature. The real change on POWERAGE is a noted improvement in songwriting skill. The six-minute "Down Payment Blues" actually has a sense of restraint and building tension, as opposed to the band's usual hit-the-ground running approach.
"Sin City," an ode to Las Vegas, features the band's most colorful lyrics (that don't have to do with bathroom humor, that is) and again displays a dynamic variety not previously heard from the Aussie rockers. The more familiar pounders, "Rock 'n Roll Damnation," "Riff Raff," and "What's Next to the Moon" are tighter, focused bursts of energy that point towards the total mastery of the form the band would display on its next release, HIGHWAY TO HELL