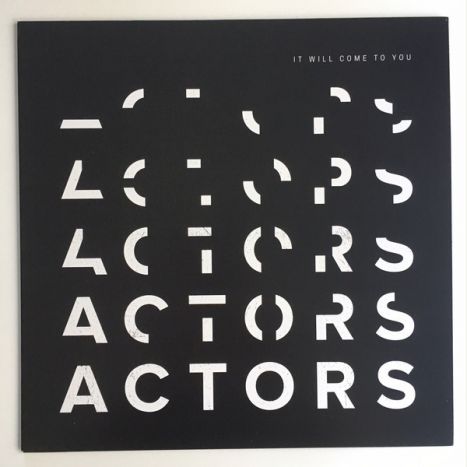 ACTORS ‎– It Will Come To You

Written, recorded and mixed at Jacknife Sound.( from Vancouver BC Canada)

" Actor’s debut LP ( from Vancouver BC) certainly doesn’t feel like one to us. Sure, that could be due to geography in our own subjective cases: seeing the band play out every couple of months for the past two years has certainly provided a familiarity with their material which isn’t universally shared. But the steady releases of singles, EPs, and videos which preceded It Will Come To You have had a much broader reach, meaning that Actors’ style – a polished and melodic yet economical take on post-punk – has been well-established both in the ears of listeners and in the hands of the band themselves. It Will Come To You thus feels like a consolidation or confirmation of the apparent ease with which the Vancouver quartet trade in memorable tunes.

A goodly portion of how pleasing the LP is to listen to and enjoy comes from good, workmanlike songwriting and arrangement, paired with contemporary production that positions them outside of straight revivalist post-punk. The mournful “Face Meets Glass” has traces of new romanticism tucked into its brief spoken passages and warbling synths and guitars, but the pulsing backbeat gives the song a sleek modern engine. Pre-release track “Bury Me” is most notable for it’s damnably catchy chorus and repeating synth figure, but you can’t discount the way the growling bass is seated squarely beneath bandleader Jason Corbett’s vocals and guitar accents, imbuing the tune with additional dancefloor appeal. Whether via the rich foggy reverbs that lay across the galloping opener “L’Appel Du Vide” or the clean, straightforward separation of instruments in the mix of “Crystal”, the story of It Will Come To You is told by smart recording choices that highlight rather than obscure its songs."( IDIEYOUDIE)