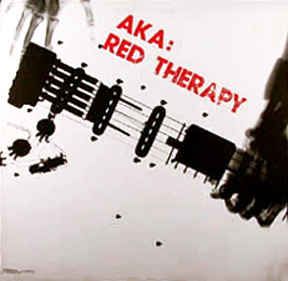 This is no-wave through and through funk, jazz, blues, punk its all here, smashed together into one big, messy, spastically bouncing ball with the letters AKA stamped across its bruised side. I looked but wasnt able to find much information concerning this arcane Canadian crew. But what I do know is that this was their prized recording, and unfortunately the only recording they completed for that matter.

Red Therapy operates much like a wind-up toy just twist the little thingy and stand back for a colorful display of animated derangement that pokes and prods while spilling guts all over the place. Each of these six songs -although easily identifiable as AKA- has a unique texture to it, making for a nice palette of seemingly mismatched sensations that will pester, delight, enthuse and confuse. The EP begins with stop-n-go jabbing from the short and abrasive opening track God, then abruptly shifts to a melody-driven, Talking Heads/Devo-esque song called City Drugs. The singer ( Dennis Mills) has a boisterous style, often quivering from low to extremely high pitches in the transportation of a single syllable just imagine Alfalfa from Our Gang fronting a freaked out cartoon artpunk band and youve got the right idea. Youll want to dance when 634 Dog unleashes its ultra squeaky, raw funk attack; and youll keep dancing once the antigravity effects of the dizzy and twisting Ragged Andy kick in. But beware, because the next track, Fear, aims to molest the mood with its creepy crawly pace and disturbing declarations; while the closing song Mental Timeboms goes completely bonkers, threatening to push you over the edge with some really batty time changes and confrontational posture. Amazingly enough, theres a great deal of pop sensibility camouflaged beneath AKAs unconventional approach to their music, but after just one listen they should easily win you over with personality alone.


All monies collected for this record will be fowarded to help Scott in his recovery in NYC
The Scotty Hard Fund". has been established for this purpose..