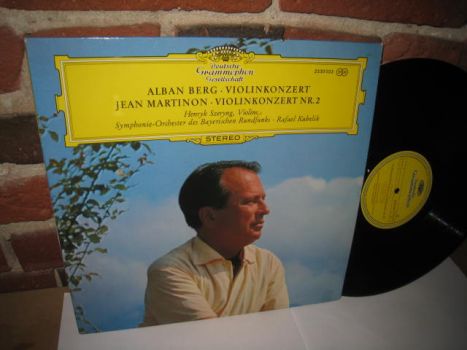 
Alban Berg's Violin Concerto was written in 1935 (the score is dated 11 August 1935). It is probably Berg's best-known and most frequently performed instrumental piece.

The concerto is structured in two movements, each further divided into two sections. The first movement begins with an Andante in classical sonata form, followed by the Allegretto, a dance-like section. The second movement starts with an Allegro largely based on a single recurring rhythmic cell; this section has been described as cadenza-like, with very difficult passages in the solo part. The orchestration becomes rather violent at its climax (which is literally marked in the score as "High point of the Allegro"); the fourth and final section, marked Adagio, is in a much calmer mood. The first two sections are meant to represent life, the last two death and transfiguration.


Like a number of other works by Berg, the piece combines the twelve tone technique, typical of serialistic music learned from his teacher Arnold Schoenberg with passages written in a freer, more tonal style. The score integrates serialism and tonality in a remarkable fashion.


Alban Berg's Concerto for violin is a composition based on a musical serie, i. e. a set of twelve tones (the whole chromatic scale) freely organised by the composer. Serial composition was invented by Berg's teacher, Arnold Schoenberg, in order to free composers from the traditional harmonic system.

The cornerstone of the whole composition is the musical quotation of a choral work by Bach expressing the distress of human beings in the material world and their hope in salvation through death: "It is enough!/Therefore, Lord, take my spirit/from here to the spirits of Zion." ("Es ist genug!/So nimm, Herr, meinen Geist/zu Zions Geistern hin").


It is a remarkable synthesis of the classical harmonic style and the new twelve-tone style. It effortlessly merges quotations from Bach and Austrian tunes with the basically atonal structure into a beautiful and moving piece (a noble swan song indeed).


Berg's Violin Concerto is relatively "easy" to listen to (for a twelve-tone piece, that is) and is absolutely beautiful. It hovers on the edges of conventional tonality and features music of incredible intensity and loveliness. For this reason, it is, I think, a good place for the "twelve-tone beginner" to start listening to music of the twentieth century.


To some, Szeryng at first might appear somewhat detached and cool, especially when his reading is set alongside more overtly emotional performances by Kyung-Wha Chung, Frank Peter Zimmerman, and in particular, Anne Sophie Mutter. Yet the secrets of this score do not reveal themselves so much through what is said, but rather in what remains unsaid. In other words, less is definitely more here, and with Kubeliks watchful and restrained orchestral support a model of distinction throughout, Szeryng is able to address the work with a degree of flexibility, rapture, and zen-like restraint thats seldom been equalled.

This is the best performance ever ! Szeryng reached an incredible depth . Its sound quality is so cultivated , awesome !!!!!