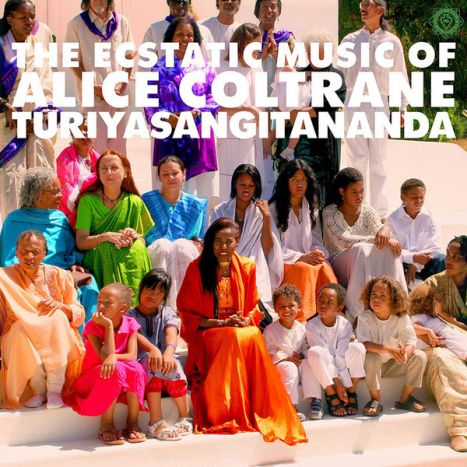 " Luaka Bop teamed with Alice’s children to find the original master tapes in the Coltrane archive. The recordings were prepared for re-mastering by the legendary engineer Baker Bigsby (Ornette Coleman, Sun Ra, John Coltrane), who had overseen the original sessions in the 80s and 90s. The compilation showcases a diverse array of recordings in addition to Alice’s first vocal work: solo performances on her harp, small ensembles, and a 24-piece vocal choir. The release is dotted with eastern percussion, synthesizers, organs and strings, making for a mesmerizing, even otherworldly, listen. Alice was inspired by Vedic devotional songs from India and Nepal, adding her own music sensibility to the mix with original melodies and sophisticated song structures. She never lost her ability to draw from the bebop, blues and old-time spirituals of her Detroit youth, fusing a Western upbringing with Eastern classicism. In all, these recordings amount to a largely untold chapter in the life story of Alice Coltrane Turiyasangitananda."

Hers is a voice that you want to believe could heal the entire world one person at a time. Its considerable power gets at the great consequence of this music. Coltrane sings over a dense cloud of sitar and drones on “Rama Rama” and over the majesty of her dazzling harp on “Er Ra.” Listening to “Om Shanti” is nothing less than an act of self-care. Once a deep cut from Divine Songs, it’s the anchor of this comp. Coltrane’s low, lucid voice—a mix of serenity and strength that is life-giving to behold—bursts as if pouring through clouds. According to the Vedas, “om” is the sound the universe made when it was created, and it continues on humming in our ever-expanding world today. Coltrane takes this primordial “om” and makes its reverberations feel visceral. This is music that will make you feel the air clarifying in your lungs, that will sweeten your breath.

Not unlike a meditation practice, the idea with chanting is to still the mind. You repeat lines of Sanskrit together to embody rhythms and create vibrations. Several tracks—“Om Rama,” “Rama Guru,” “Hari Narayan”—place Ecstatic Music into this collectivist context, performed by a large group, clapping and shaking bells, working into a forceful trance. Like any music deploying repetition to euphoric effect—hardcore, techno, minimalism, doom metal—chanting is transcendent and endless. The recordings here elucidate the magnetic pull of these utopian ashram environments; they are the opposite of the void. Even the nearly 11-minute “Journey in Satchidananda,” which bears little resemblance to Coltrane’s similarly-titled astral jazz masterpiece, contains a peculiar release despite its funereal atmosphere and operatic drama."