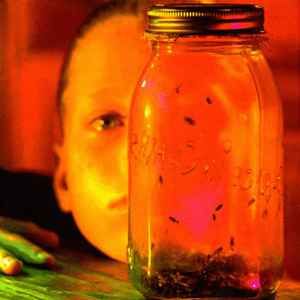 Alice In Chains - Jar Of Flies


Despite being AIC's shortest and softest album, and despite my opinion that "Dirt" is perhaps the most exemplary display of the band's sound, I'm gonna go out on a limb here and say that "Jar of Flies" is the most perfect album they have ever done. Not only that, but I'll also say, without a moment's hesitation, that this is one of the most perfect albums ever made, by anyone. It was here that the band's warm, emotional side really shone through like never before. The music is largely acoustic (with some electric here and there), and Layne really just sang his heart out.

The album begins with "Rotten Apple", one of the band's most epic and beautiful pieces, with a mesmerizing guitar/bass melody, and those haunting AIC style vocal harmonies we all love. "Nutshell" and "Don't Follow" are acoustic ballads of incomparable emotional power; "I Stay Away" is super-creepy, with perfectly executed string arrangements. "No Excuses" is the catchiest song, with a great chorus. "Whale and Wasp" is a short instrumental, which is very tranquil and somewhat elegiac, and again we have some nice strings. The album ends with a curve, with "Swing On This". This song is sort of bizarre and jazzy, and makes for a fun ending to an otherwise dark and dreary listening experience. Despite the surprise it presents, it still fits in very well.

Alice In Chains - No Excuses


Alice In Chains - Swing On This