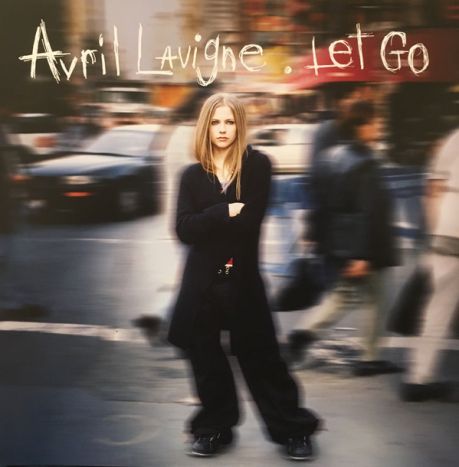 Avril Ramona Lavigne (born September 27, 1984) is a Canadian pop punk singer/songwriter and actress who is known for her "skater punk" persona. Her albums have topped the charts in numerous countries. Although her name is of French origin, she herself does not speak French and her name is pronounced in an anglicized way, more or less as "La-veen". Avril means "April" in French and is pronounced "Av-reel".

( Pitchfork) "The exact division of labor behind “Complicated” remains a point of contention. When Lavigne spoke to Rolling Stone in 2003, she insisted that she was the primary author; the Matrix argued that her contributions were far less substantial. “Avril would come in and sing a few melodies, change a word here or there,” Christy told Rolling Stone. “She came up with a couple of things in ‘Complicated,’ like, instead of ‘Take off your stupid clothes,’ she wanted it to say ‘preppy clothes.’” When asked to comment, L.A. Reid opted for poptimism through an executive’s lens. “If I’m looking for a single for an artist, I don’t care who writes it,” Reid told Rolling Stone.

No matter where the song falls on the authenticity spectrum, “Complicated” is the teenage state of mind: a hissing, bubbling cauldron of anger, confusion, naïveté, lust, paranoia, and desperation. It’s a moment in time where you’re childlike enough to beg for a simple explanation for everything and just mature enough to know there’s no such thing. (Maybe you’d neg a friend by saying, “Chill out, what you yelling for?” and then scream at the top of your lungs a few seconds later.) It’s a phase where you can barely understand your own behavior, let alone anyone else’s, and the quality that set Lavigne apart from peers like Michelle Branch and Vanessa Carlton—singer-songwriters mining the same musical and emotional terrain—was her ability to imbue her music with the thrill and terror of real teenhood.

The song echoes throughout the rest of Let Go: Lavigne’s need for clarity and authenticity, her struggle to find solid ground, her general distaste for the bourgeois tyranny of polo shirts. It also sounds incredible, in part because the Matrix understood that Lavigne could sing with enough defiance to camouflage their clear, starry-eyed pop melodies. After opening with some lazy record-scratching and the brightest, bluest chords this side of “Free Fallin’,” “Complicated” locks into a military structure: twinkling keyboards, tight drum loops, a teasing vocal hook that can still send a karaoke bar into a frenzy. Everyone involved knew it was a hit right away, and when Reid heard it he sent Lavigne back to the Matrix to bang out a dozen songs just like it.

Lavigne felt conflicted about her work with the Matrix—they ended up contributing five songs to Let Go, the same number as Magness—and was practically disowning it while Let Go was still flying off of store shelves. “I don’t feel like ‘Complicated’ represents me and my ability to write,” she confessed to Rolling Stone. “But without ‘Complicated,’ I bet you anything I wouldn’t have even sold a million records."

" And Let Go’s hidden gem is “Anything but Ordinary,” a coming-of-age anthem with a melody like pure spring water. (It’s also the one song on the album that tests your suspension of disbelief with its lyrics—listen and hear Lavigne describe the world as “A beautiful accident/Turbulent, succulent/Opulent, permanent” in the bridge.) L.A. Reid would’ve made it the album’s title track if Lavigne hadn’t intervened. She’d already been forced to subjugate her instincts. Couldn’t she just name the album?"