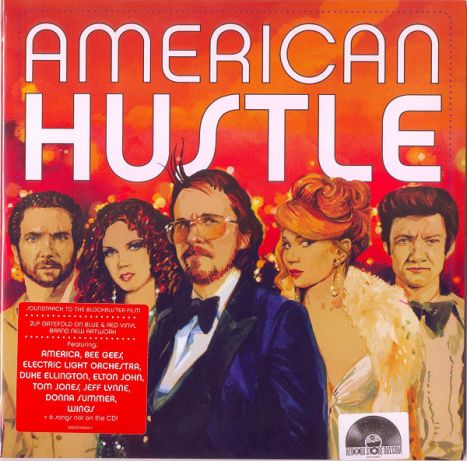 A fictional film set in the alluring world of one of the most stunning scandals to rock our nation, American Hustle tells the story of brilliant con man Irving Rosenfeld (Christian Bale), who along with his equally cunning and seductive British partner Sydney Prosser (Amy Adams) is forced to work for a wild FBI agent Richie DiMaso (Bradley Cooper). DiMaso pushes them into a world of Jersey powerbrokers and mafia that's as dangerous as it is enchanting. Jeremy Renner is Carmine Polito, the passionate, volatile, New Jersey political operator caught between the con-artists and Feds. Irving's unpredictable wife Rosalyn (Jennifer Lawrence) could be the one to pull the thread that brings the entire world crashing down. Like David O. Russell's previous films (Silver Linings Playbook, The Fighter, etc.), American Hustle defies genre, hinging on raw emotion, and life and death stakes.


"American Hustle: Original Motion Picture Soundtrack" (15 tracks; 55 min.) is chock-full of excellent songs from the 1970s, some of them very well known (and deemed "classics") and others not so much (and deemed "forgotten nuggets"). First things first: regrettably (and for reasons totally unclear to me), the soundtrack does NOT brings the songs in the same order as they are played in the movie. Instead, the sequencing seems pretty much entirely random. The soundtrack starts here with Duke Ellington's "Jeep's Blues" (Ellington is a common interest of two of the movie's main characters), then we dive straight into Elton John's "Goodbye Yellow Brick Road".


One of the most hilarious scenes in "American Hustle" comes late in the movie when the character played by Jennifer Lawrence, a 'dumb blond' housewife called Rosalyn, cleans house and sings/dances to Paul McCartney's Live and Let Die, now playing upfront on the soundtrack. Another very memorable scene comes when Bradley Cooper's Richie and Amy Adam's Sydney characters go out on the town and end up dancing at a club to Donna Summers' classic I Feel Love, after which the movie shifts to another scene where other characters are singing/dancing along to Tom Jones' Delilah.


Sheer delight! America's Horse With No Name, one of the first songs in the movie, is buried deep on here. Perhaps the biggest surprise here is the inclusion of ELO's Long Black Road, which is not a 70s song at all (it's from their 2001 Zoom album), but somehow it fits in nicely with the other tunes. Interesting 'bonus' also is the very last track, Irving Montage, a 2 min. orchestral instrumental from composer Danny Elfman who adds incidental music to the movie. Long story short: there is a ton of great music here. A bloody shame that for whatever reason the songs are sequenced the way the are. It won't bother you of course, in case you are buying this without having seen the movie.

Just a few words on the movie: "American Hustle" is another tour de force for director David Russell, after last year's Silver Linings Playbook, and The Fighter the year before that. From the moment the movie opens, Russell pulls us in and won't let go until some 2 hours later. At some point in the movie it becomes impossible to tell who is manipulating whom, and you'll just let go, smile, and be surprised as the movie unfolds. Because of the nature and era of the movie, "American Hustle" feels like The Sting-meets-Taxi Driver-meets-The Godfather, just a delight from start to finish, and one of the better movies of 2013.

Bottom line: "American Hustle", both the soundtrack and the movie is highly recommended.


America - A Horse With No Name

that's what a rock star should look like, Bowie back in the 70's reinvented himself so many damn times it's just mind blowing but he was never as cooler then during this Ziggy/Aladdin era, with a awesome guitarist in Mick Ronson by his side. You couldn't go wrong. This is one tight performance