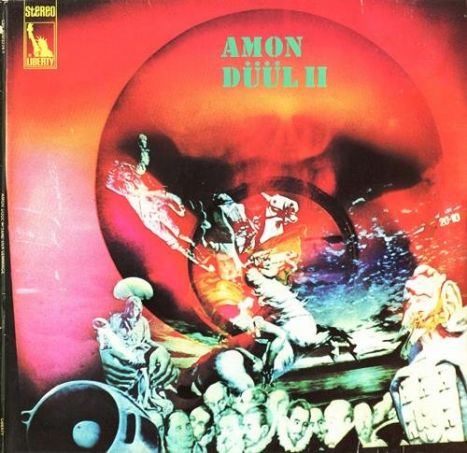 Records are VG++ has some light wear (listen to our copy)

Syntelman's March Of The Roaring Seventies

B1 Landing In A Ditch 1:12
B2 Dehypnotized Toothpaste 0:52
B3 A Short Stop At The Transsylvanian Brain-Surgery (Vocals – Lothar Meid) 5:00

Race From Here To Your Ears

Amon Düül II was born of an artistic and political community’s scission called Amon Düül (who recorded during the late sixties a long live session made around collective and free musical improvisations). The band emerged from the underground German rock scene...

( pitchfork) "Syntelman's March of the Roaring Seventies," at almost 16 minutes, is actually the shortest of the epics on Lemminge. Unlike Can, whose Tago Mago was released shortly after this album, Amon Düül II's lengthy pieces are generally fleshed out works, rather than pure studio concoctions and pastiches of improvisation or shorter segments. "Syntelman's" starts ominously enough with a wall of chimes and distant organ tones, but the insistent bass and drum groove boils to the surface, with Karrer's acoustic guitar (which is a major component on the album, and one reason why it feels less a hazy workout than previous releases) working over top, and even some light mellotron (sounding like a choir of children) to give it sci-fi charm. "After a long introducing, you can listen to the story," says the singer, and so another light acoustic guitar interlude brings in the next section. The band may have been influenced by Space Oddity-era Bowie, as many of the pieces featuring song-like sections are reminiscent of Bowie's more whimsical outings. All things considered, this is a pretty warm introduction to the band, if you were so inclined.

"Restless Skylight-Transistor Child" begins with one of about a hundred classic riffs featured on Lemminge-- and if there's one major difference between this album and its predecessors, it's the noticeable increase in major league, hard rock riffery. This leads to a completely different, though equally classic riff, and to still another riff after that. The last one, though, brings it down a notch, and even introduces some nice sitar to the mix. Where this band has distanced itself from the other krautrock bands is its unrelenting eclecticism and variety in its arrangements. Even Faust couldn't claim as many points of reference points as this tune: after the rocking intro, it goes to ghostly freak ambience, then to Musique Concrète broken carousel, onto über-Foghat territory with riffs aplenty, then to something that sounds like it was ripped off of the first Funkadelic album with Hendrix guitar and big beats, and then a crazy gypsy violin goes apeshit. See?

The final grossewerk is perhaps the centerpiece of the record, "Chamsin Soundtrack/The Marilyn Monroe Memorial Church." Where the previous pieces were long, they weren't necessarily mind-expanding (which is what I expect from the best Amon Düül II), and this piece makes up for that in spades. Beginning with cloudy, undefined organ/feedback ambience-- and with a little ancient violin lament here, future-shock noise there-- it is positively"