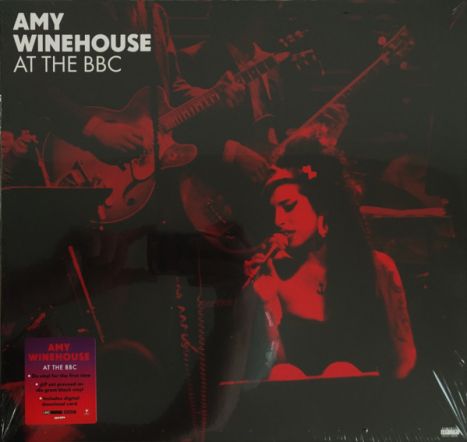 Amy Winehouse – At The BBC

Label: UMC – 3541560, UMC – 0602435415604
Format:
3 x Vinyl, LP, Album, Stereo, 180 gram
NEW SEALED COPY
Release catalogue numbers on spine and backsleeve.
Individual sub-catalogue numbers for LP1 to LP3.
All runout inscriptions are etched.
Barcode and Other Identifiers
Barcode (Text): 6 02435 41560 4
Lacquer Cut at – Abbey Road Studios
Credits
Lacquer Cut By – Miles
Hype sticker on front shrink:
"On vinyl for the first time - 3LP set pressed on 180 gram black vinyl - Includes digital download card"
Comes in deluxe fold out sleeve with 3 printed innersleeves with photos and credits, download code.
Country: UK, Europe & US
Released: May 7, 2021
Genre: Jazz, Funk / Soul
Style: Soul, Soul-Jazz, Big Band, Neo Soul
Tracklist
A1 Stronger Than Me
A2 Take The Box
A3 Teach Me Tonight
Featuring – Jools Holland
A4 Rehab
A5 Tenderly
Featuring – Jools Holland
B1 Tears Dry On Their Own
Written-By – Amy Winehouse, Nickolas Ashford, Valerie Simpson
B2 Monkey Man
Featuring – Jools Holland
B3 I Heard It Through The Grapevine
Featuring – Jools Holland, Paul Weller
B4 Don't Go To Strangers
Featuring – Jools Holland, Paul Weller
B5 Love Is A Losing Game
C1 Know You Now
C2 Fuck Me Pumps
C3 In My Bed
C4 October Song
C5 Rehab
C6 You Know I'm No Good
D1 Just Friends
D2 Love Is A Losing Game
D3 Tears Dry On Their Own
D4 Best Friends, Right?
D5 I Should Care
D6 Lullaby Of Birdland
D7 Valerie
D8 To Know Him Is To Love Him
Written-By – Phil Spector
E1 Know You Now
E2 Tears Dry On Their Own
E3 You Know I'm No Good
E4 Just Friends
E5 He Can Only Hold Her
E6 I Heard Love Is Blind
E7 Rehab
F1 Take The Box
F2 Some Unholy War
F3 Back To Black
F4 Valerie
F5 Addicted
F6 Me & Mr Jones
F7 Monkey Man
Written-By – Frederick Hibbert
Photography By [Cover] – Shane O'Neill
A1 from "Later With Jools Holland," Nov. 2003.
A2 from "Mercury Prize," Sept. 2004.
A3 from "Hootenanny," Dec. 2004.
A4 to B1 from "Later With Jools Holland," Oct. 2006.
B2 to B4 from "Hootenanny," Dec. 2006.
B5 from "Mercury Prize," Sept. 2007.
C1, D4 from "Leicester Summer Sundae," 2004.
C2 to C4 from "T In The Park," 2004.
C5, D8 from "Pete Mitchell," 2006.
D1 from "Big Band Special," 2009.
D2 from "Jools Holland," 2009.
D5, D6 from "The Stables," 2004.
C6, D3, D7 from "Jo Whiley Live Lounge," 2007.
E1 to F7: Recorded live at Porchester Hall, 2007.
"At The BBC starts strong with a collection of tracks from 2003-2007, most of which from different appearances on Jools Holland’s Hootenanny and On Later… With Jools Holland. Opening with “Stronger Than Me”, Winehouse’s voice sends chills down your spine as she builds from a raspy whisper to a smoky belt. The band behind her are masters of taste and sophistication, as they set up her melodic runs, accent the chorus with lush harmonies on the horns, and keep an unshakeable pulse. The few moments where they let loose, they shred – this is an all-star band in every sense, but their greatness lies in their ability to serve Winehouse and the song with a sense of class and restraint. From the sultry jazz of “Teach Me Tonight”, to the New Orleans swing of “Monkey Man”, and a stunning cover of Marvin Gaye’s “I Heard It Through The Grapevine, the first third of the live album is more than strong enough to stand on its own.
The middle section of At The BBC includes an assortment of performances from a variety of radio sessions and festivals. While there are a handful of repeated tracks between the different sections of the album, each performance remains unique from the other, which further emphasises the soulful spirit of Winehouse, along with the jazz sensibilities that she brought to her performances. The songs from her 2004 T In The Park concert are particularly exciting, including the irresistible strut of “Fuck Me Pumps” and “In My Bed”, this section of the record additionally features a stirring performance of “Lullaby Of Birdland” and a classic performance of “Valerie”.
At The BBC comes to a conclusion with Winehouse’s 2007 concert at Porchester Hall. The 14-song set is yet another incredible display of Winehouse and her band and continues to shine, despite the repeated songs from earlier on the album. From the show opener, “Know You Now”, to its closer, “Monkey Man”, Winehouse and her band are on top of the world. The performance reaches truly spectacular highs with songs “You Know I’m No Good”, “Me & Mrs. Jones”, and the quintessential hits, “Rehab” and “Back To Black”.

Transcending pop and jazz, At The BBC is a fantastic collection of live highlights from Winehouse’s all too short career. Her vocals, unparalleled, and her band, as tight as they come, At The BBC is a testament to the timelessness that is the artistry of Winehouse. Carefully curated, At The BBC is the best of Winehouse like you’ve never heard before."