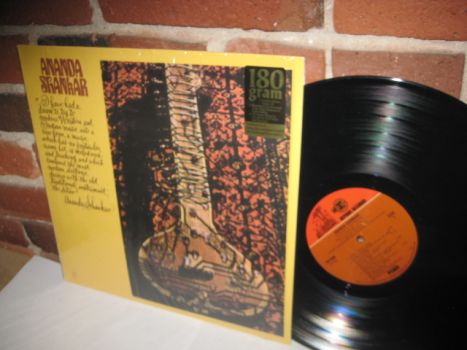 From the liner notes:
"His Name Is Ananda. He's a young man with a sitar and a dream and his name means peace and joy.
He's as Indian as the tradition in which he recieved his education as a classical musician.
But he's excited about Led Zeppelin and Janis Joplin and electronic music. "

Enjoy the psychedelic funk of the Sitar mixed with synthesizers.
funk breaks

If you have ever thought that western and Indian music would sound fantastic together, this is the album to listen to. Ananda Shankar blends sitar, guitar, bass, electronics seamlessly in these tunes from the beat generation and from his homeland. A smooth sitar replaces the voice, while western instruments provide backings to rival the best beats and sounds of the time. Ananda's musical heritage (he is Ravi Shankar's nephew) is evident in the snappy arrangements and the many exotic sounds. Moving off planet Earth recently, let's hope he's in the best gig in the sky. Although there are a few imitators, this is the one you'll think of as how fusion should be written.