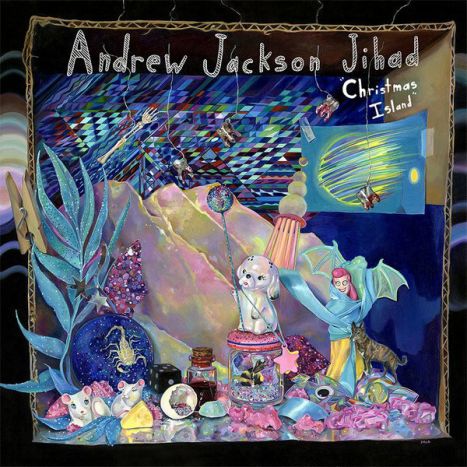 1 Temple Grandin
2 Children Of God
3 Do, Re, And Me
4 Coffin Dance
5 Getting Naked, Playing With Guns
6 I Wanna Rock Out In My Dreams


Christmas Island is Andrew Jackson Jihad's debut full-length on Side One Dummy; an unexpected, but fairly well-received switch from Asian Man Records. It also is their first record with their three new permanent members. The announcement of these new members was in their very funny promotional video for their crowd-funding venture to buy a Sprinter van for their upcoming tour. They managed to get to their first goal of $15,000 in just under five hours and by the end of the month-long venture they reached over $33,000.

If you kept tabs and donated to their crowd-funding campaign, then you probably know that the single from Christmas Island is called "Children of God." This was the perfect song for them to choose because since we know that the punk scene isn't typically very keen on a band's line up change (let alone a label change), this song reassures Andrew Jackson Jihad's listenership that they are still writing weird (in a good way), random, heartfelt songs filled with raw emotion and funny lyrics like: "I saw the Children of God/As they walked on slovenly by/The USB ports in their arms were bleeding."

Andrew Jackson Jihad's last release was the fantastic Andrew Jackson Jihad: Live at the Crescent Ballroom, which featured a few new tracks from the band. Of those new tacks only "Kokopelli Face Tattoo" made it on Christmas Island. Unfortunately, the amazing song "#armageddon" did not make it on this album. Hopefully, they will release a studio version down the road (PLEASE!). Compared to the live version of "Kokopelli Face Tattoo," the tempo of this one has been slowed a bit and a lot more fuzz has been added to the guitars.

As for the rest of the album, its actually darker and gloomier sounding compared to their previous releases. Production-wise, it's also fairly polished. It's not too polished, but its noticeable when compared to previous releases like Can't Maintain. It also relies a little more on electric guitars as well. But don't fret. There's still plenty of Sean's great acoustic guitar work with Ben backing him up on bass along with the accompaniment of other instruments such as piano, mandolin, drums and even (what I believe to be) an organ just to name a few. And Christmas Island still has a lot of AJJ's famous angst, dark humor and self-loathing, notably in songs like "Deathlessness" and "Do, Re, and Me." Even the lyrics of first track, "Temple Grandin," say: "Open up your murder eyes/And see the ugly world that spat you out," and the song "I Wanna Rock Out in My Dreams," which is very "Big Bird"-esque, has the lyrics: "The older I get/The more articulate I am at whining."

So for those of you who are worried in any way about this band because of their label and line up changes, don't be. Christmas Island is another great addition to Andrew Jackson Jihad's discography.

During the period of writing this record it became difficult to write songs, says Andrew Jackson Jihads vocalist-guitarist Sean Bonnette. This could, in part, serve as a contributing factor to why the prolific band slowed a bit following the release of its fourth album, Knife Man, in 2011. I kind of forgot how to play guitar right, and everything I was writing was the same kind of boring-ass rock-structure songs, says Bonnette, who in his decade fronting the Phoenix band has rarely dealt in rock tropes. If anything, Bonnette and bassist Ben Gallaty have always been focused on dismantling rock characteristics instead of embracing them. When Bonnette emerged from the songwriting funk it was with newfound purpose, and Andrew Jackson Jihads fifth album, the maniacally evocative Christmas Island, proves it was worth the wait.

Bonnette uses the first few seconds of Temple Grandin to fake out the audience, as his strumming of an acoustic guitar quickly gives way to a rush of keyboards, drums, and reverb freakouts. What follows cant help but feel like the product of Jeff Mangum writing an album during a vivid fever dream, and its all the more fitting given that Children Of God was the product of such an experience, with Bonnette noting he actually wrote [it] when I had a fever. I was watching this vampire movie, and I just read the Wall Of Voodoo chapter in Songwriters On Songwriting, and I got to come up with some imagery I really enjoyed. Its these bright, bouncy bloodbaths that prove even as the bands grown, Andrew Jackson Jihad hasnt lost its subversive edge.

The production of John Congleton offers vibrancy to Bonnettes rich hallucinations and pop-culture references (ones that reach from Stevie Wonder and Man Is The Bastard to the Slap Chop), and as the music alternates between rocking and delicate, so do the albums themes. I was getting ready to accept the death of my grandfather. A lot of the songs like Coffin Dance and even Linda Ronstadt I think have some of that, and [Christmas Island] tries to capture that feeling of catharsis and overwhelming emotion that you cant really explain, says Bonnette, and this marriage of catharsis and witticisms allows Christmas Island to strike a balance.


Incredible album. it's different from previous albums, sure, but lyrically it's fantastic and the production is great.