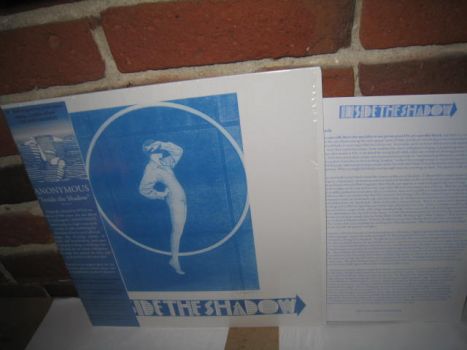 this copy has been opened

LP is sleeved in a tip-on jacket, with a reproduction of the original lyric insert

Restored to its original glory for the first time since its initial release, this is the definitive INSIDE THE SHADOW!

- First officially licensed reissue of this classic in almost twenty years; issued with the group's full cooperation and assistance


Close to the perfect album; each element has been drawn from the best possible source, yet somehow Ron Matelic manages to fuse these massive building blocks into personal, deeply human music.  Patrick Lundborg, THE ACID ARCHIVES

A somewhat mysterious but eminently worthwhile quartet from Indianapolis, IN, Anonymous was active in the mid- to late '70s but sounded like they came from a decade earlier. The group's acknowledged antecedents were the Beatles and the Byrds, but from such familiar trappings, Anonymous created a richly textured version of classic psychedelia that both adheres to and ignores the common precepts of the genre. The mellow, wide-ranging but never aimless results sound like a cross between a far more structured version of Quicksilver Messenger Service and an American equivalent of the fluid, jazz-tinged progressive rock of Curved Air.
This is a superb album of melodic guitar driven rock which blends exquisitely with Marsha's vocals on tracks like J Rider, Up To You, Pick Up And Run and Baby Come Risin', which is probably the album's finest moment. If you like ringing guitar work and harmonic vocals, this album is for you.


Originally released in 1976 in an edition of 300 copies, the sole album by Indianapolis ANONYMOUS stands today as a high-water mark in rock n roll, combining the adventure of west coast ballroom groups, the 12-string majesty of Byrds, and breathtaking multi-part harmonies to forge something inimitable and one-of-a-kind, with powerful songs that pushed the limit and raised the bar at the same time. Long time top ten favorite with almost every head we know, a true classic recommended for everyone into amazing rock records of all varieties.


Anonymous - Pick Up And Run

"One of the most underrated groups of all time."


Anonymous - Up To You


Anonymous - Pick Up And Run