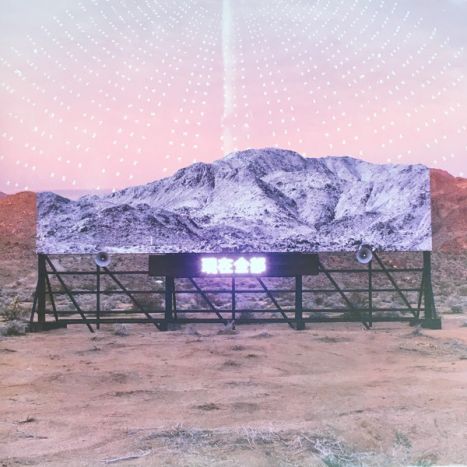 Released in a gatefold sleeve with a printed inner sleeve and a folded printed insert.

Released in a gatefold sleeve with a printed inner sleeve and a folded printed insert.

"Everything Now" contains elements from "The Coffee Cola Song" written by Francis Bebey.

Per usual, Butler's teen-preacher-cum-rock-star persona steers the ship. The punk rant "Infinite Content" and the loping country waltz "Infinite_ Content" are mirror versions of a single song that takes aim at the digital excess of the streaming era: "We're infinitely content/All your money is already spent," Butler declares, recalling the dissatisfied Everymen of the Stones' "Satisfaction" and Bruce Springsteen's "57 Channels (And Nothin' On)." On "Creature Comfort," a New Order-ish interrogation of "the white lie of American prosperity," kids lust for fame while they battle self-loathing, starving and cutting themselves. It's treacherous territory, but the band navigates it bravely, especially when it turns the critical lens on itself. When Butler sings, "I'm a liar/Don't doubt my sincerity," he conjures no one so much as Bono as "The Fly" circa Achtung Baby – another earnest dance-rock conversion.

Ultimately, Everything Now is about having a cultural banquet on offer and still feeling hungry. "A terrible song on the radio, baby/What else is new?" laments Butler on "We Don't Deserve Love," a queasy, gorgeous ballad that wonders if the human race has maybe earned its pending extinction. Jury's out. But Arcade Fire have made a perfect soundtrack for pondering the question. "