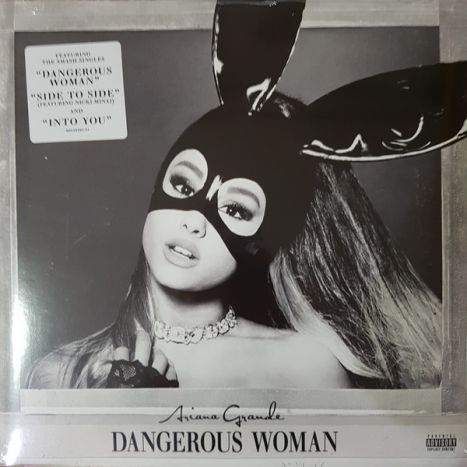 the production on her new Dangerous Woman is enormous, full of flirty pop eruptions and slinky dancefloor seductions. "Into You," produced and co-written by Max Martin and Alexander Kronlund, who helped pen some of Robyn’s best songs, might be Grande's best single since “Love Me Harder.”

So then where does Dangerous Woman struggle? In a rather forthcoming interview with Billboard, Grande described the album as “a 22-year-old girl comes into her own trying to balance growing up, love, and a lot of other bullshit along the way.” However, the listener comes away from Dangerous Woman feeling like they still don’t know much about the ponytailed lady peeping out from behind the mask. Grande has never touted herself as a Swiftian friend to all fans, but her slight reserve means that Dangerous Woman, paradoxically, feels safe, which acts in contradiction to the at least 19 times she sings a variation of “danger” or “dangerous” on the record.

*Dangerous Woman *opens with “Moonlight,” which was originally the title of the record and thusly should perhaps be viewed as a prologue. “Moonlight” offers the album’s closest thing to a ballad, all celestial romance and melismas. But its serenity is quickly steamrolled over by “Dangerous Woman,” the real introduction to the record. “Dangerous Woman” is a slinky, empowered, Bond theme of a belter; you can practically picture her sauntering down a grand staircase in a floor-length gown and fur on the way to seduce and destroy a lover. After the quake of “Dangerous Woman,” “Be Alright” and “Into You” are appropriately both cool, snappy little thumpers."