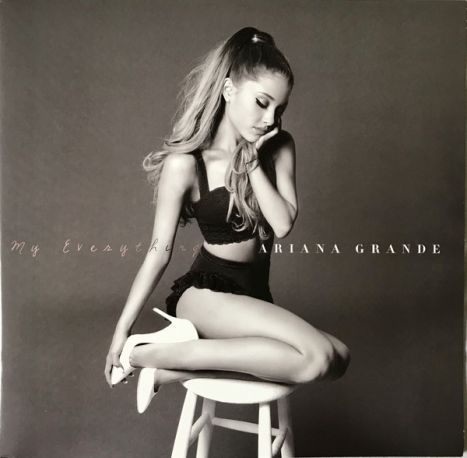 Ariana Grande ‎– My Everything

"On My Everything, Grande ditches the manic-Disney-dream-girl ballads and goes straight for the bangers; while it may not be as consistent a statement as Yours Truly, it’s refreshingly grown-up. It’s no coincidence that the album’s two lead singles were produced by Max Martin, the guy who practically defined millennial pop bildungsroman and, 14 years ago, penned “Oops!…I Did It Again” and “Stronger” for a transitional Britney. They might be the year’s strongest one-two punch of singles: “Problem”, with its alluringly strange reverse-build-up (Grande’s howling pre-chorus primes us for an even bigger release, only to drop impishly into Big Sean whispers, mirroring the un-met expectations of the song’s bad-news boyfriend), and the Zedd-produced stomper “Break Free”, a colossal kiss-off that doubles as a “Stronger” for the EDM age. Grande’s side-step to the dancefloor feels pre-ordained, rather than a cash-out: “Break Free”’s festival-closing ambition perfectly pairs with her stadium-sized voice, and injects some much-needed femininity into EDM’s typical machismo.

Where Yours Truly was willfully off-trend, My Everything reveals a better understanding of “cool,” even if it occasionally misses the mark. Here, Grande exists gleefully in her own age, rather than gesturing vaguely towards a second-hand idea of “retro.” Even when the plinky soda-fountain sounds of her debut trickle back in, as on Cashmere Cat-produced “Be My Baby”, the effect is more Terius Nash than Pinterest-board pastiche. The features represent more grown-up choices, and coax some stunning performances out of typically middle-of-the-road guests: the Weeknd skulks out from the shadows and into the light on throbbing big-room ballad “Love Me Harder”, and A$AP Ferg delivers arguably his best guest spot ever on the Christina Aguilera-nodding sex jam “Hands On Me”.

It’s fitting that the two most sexually explicit songs on the album are some of its best; " ( pitchfork)