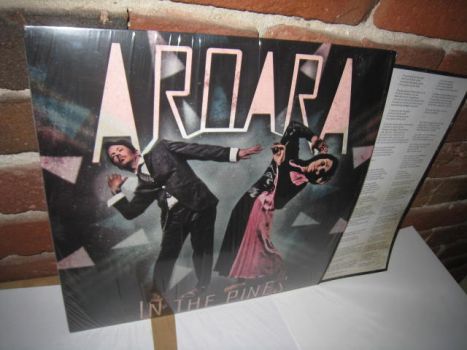 
AroarA is the new duo from Montreal's Andrew Whiteman ( Broken Social Scene founding member, Apostle of Hustle guitarist ) and Ariel Engle. they play amplified cigarbox guitars and use a 404 sampler to trigger mellotrons and black sabbath bells. its a new type of minimalism which allows the emotions to come through unimpeded by bombast or blarney. vocal duets, twin guitar lines and thundercloud drum machines are their stock-in-trade.

This first incarnation of the group is focused on the work of american poet Alice Notley. Her book "In The Pines" was published in 2007 and concerns the spiritual and visionary experiences of a woman who is undergoing the cure for hepatitis-C. her visions are depression era tableaux, and her book is laced with quotations from the gospel, folk and blues music of that period. AroarA were inspired to transform these poems back into music. With Alice Notley's permission they recorded 14 songs corresponding to the 14 poems in the book.

They used the words from each poem to make faux-folk songs forms, and then added beats, melodies, and the abovementioned effects. there are no sounds from later the 1975. "In The Pines" was recorded in various livingrooms in Canada and then mixed impeccably and minimally by none other then Constellation Records' artist Sandro Perri.

The album was named after the American poet Alice Notley's 2007 book In the Pines. That book contains 14 poems about a woman undergoing treatment for Hepatitis C, and with Notley's approval, AroarA wrote a song to go along with each poem.

Nine of those tracks appear here, each named simply after the poem number, and they take an experimental approach to folk and rock. "#10" moves between disorienting, organ-like chords and raw roots licks, while "#3" swells from barely there balladry to rickety atmospherics, and "#12" is anchored by a riff-driven stomp. These were recored in various Canadian living rooms and mixed by Sandro Perri.