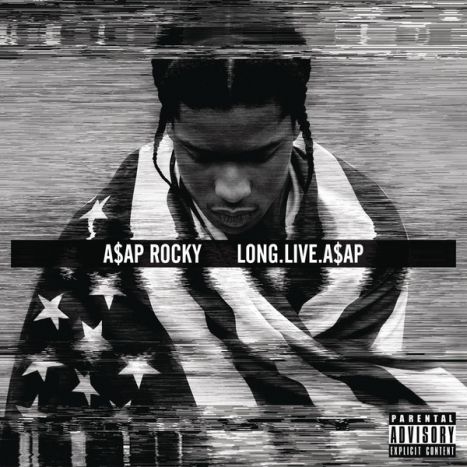 A1 contains a portion of the composition "I," written by Laura Jane Lowther.

C1 contains samples from "Maseet Sineen" written by Yaacoub Al Khobeisi and Al Naser as performed by Asala, produced by Rotana; and "Get Out Of My Life Woman" as performed by Solomon Burke.

C2 contains a sample from "Mr. Yeah," written by Christopher Stewart and Terius Nash, as performed by The Dream.

D1 contains a sample of "Destruction" from "Breath Of Fire IV"

D2 contains a sample from "Psychobabble," written by Imogen Heap, Peter Chill and Allan Sigsworth, as performed by Frou Frou.

D3 contains a sample from "Headlock" written and performed by imogen Heap.


Anyone who considers themselves a rap enthusiast must be encouraged by the influx of new talent streaming in. Harlem rapper Rakim Mayers, better known as A$AP Rocky, is making a strong push toward the front of the line. He's establishing himself in the industry the way many of his brethren are: with mixtapes. Kendrick Lamar and Frank Ocean, most notably, have presaged highly successful albums with independently released mixtapes. Most notable is Rocky's $3 million record deal with Sony/RCA subdivision Polo Grounds Music, the fruit of which is his major label debut, LongLiveA$AP.

One thing this album does not do is try to be intellectual. In strong contrast to recent albums predicated delivering sociopolitical messages, like Killer Mike's R.A.P. Music, or albums with strong thematic elements like Kendrick Lamar's Good kid m.A.A.D. city, Rocky's record doesn't make an effort to be lyrically deep. Rocky himself puts it best on album closer "Suddenly," declaring "don't view me as no conscious cat, this ain't no conscious rap/f*** the conscious crap, my mac'll push your conscious back."

What LongLiveA$AP does do is display Rocky's boundless skill as a rapper. His delivery is loud, forceful and clear; he is able to spit rhymes with great rhythm and flow. It also serves as a great showcase piece for the youth rap movement. LongLiveA$AP rounds up most of the key names being shouted now within the indie community (with the obvious exception of the Odd Future collective).

But it doesn't take long to find Odd Future parallels. Album opener "Long Live A$AP" is an ominous and foreboding track that shows off Rocky's sense of paranoia. He asks, "who's that looking in my window with a pistol to my curtain?" With its stripped back beat and its introspective nature, it is reminiscent of Tyler, the Creator's "Yonkers." It features a surreal falsetto chorus that gets downright creepy near the end when a chorus of children's voices join in.

Lead single "Goldie" was a great choice as a teaser, as it highlights many of Rocky's critical strengths. The flute beat is also great; it gets out of the way and lets Rocky do his job but is distinctive enough to give a tangible coloring to the track. It makes Rocky feel outside the box and inventive, something many people disillusioned with the current state of rap are looking for.

"PMW (All I Really Need). This is one of the most blatant, sexually explicit rap tracks since Kanye's My Beautiful Dark Twisted Fantasy. The verses have that sort of loud, in your face club quality that was best captured by Sean Paul. Schoolboy Q's guest appearance here is very effective, as both rappers prove themselves as talented emcees.


One of the album's biggest strengths is that very few songs sound the same. On "Lvl" he mellows out considerably, slowing things down with a beat not unlike Aphex Twin's "Xtal," while "Hell" features Santigold sounding a bit like M.I.A. on the chorus hook. The song has a ravey beat, but it's slowed down and subdued to the point you wouldn't notice if you're not paying attention.

The seventh track, "F***** Problems" is one of the most star studded on the album. 2 Chainz powers what is most certainly the catchiest hook on the album, while superstars Drake and Kendrick Lamar join Rocky in putting on a solid but not stellar performance All three have dropped better verses in their career, and given the collection of talent one must wonder if they were more concerned with trying to wow their audience with name brand than they were with constructing the caliber of verses that won them name recognition in the first place. Yet even despite this, the song is still an easy album highlight.

Yet no track is more star studded than "1train," an effort that features so many guest rappers it would be too much to even list them all here. There is no hook, just six minutes highlighting the best up and coming talent in indie hip hop. The piece does an outstanding job of establishing the personality of each individual rapper, and in that regard it bears great similarity to Eminem's D12 pieces such as "Purple Hills" or "Under the Influence." All parties involved do a fantastic job, but honors for best verses go to Kendrick Lamar, Danny Brown, and Big K.R.I.T.

"Wild for the Night," featuring the always sensational Skrillex, is about as subtle as dropping a dishwasher on the listener's head. The real highlight, though, is Rocky's blistering spitfire verses.

Album closer "Suddenly" is the album's most startling song. It is very surreal, reflecting on how he went from living in the hood to all of a sudden being famous. The beat is almost nonexistent. In the background you have what sounds like TV cartoons from the 1950s playing, along with a chorus of singers from the the big band era. The first verse is slow and meandering but on the second verse he starts spitting faster and the effect, contrasted with the first verse, is pretty clever. Rocky has managed to bookend the album with two very mystifying, unsettling tracks.


ASAP Rocky - Wild For the Night