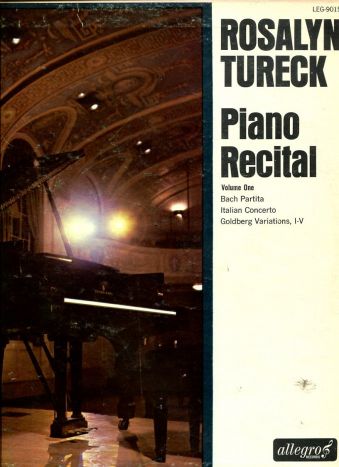 B1 Allegro
B2 Andante
B3 Presto
B4 Goldberg Variations I-V, BWV 988

Rosalyn Tureck was one of the most important figures in the interpretation of the music of J.S. Bach in the 20th century.
Rosalyn Tureck (December 14, 1913 – July 17, 2003)] was an American pianist and harpsichordist who was particularly associated with the music of Johann Sebastian Bach. However, she had a wide-ranging repertoire that included works by composers including Ludwig van Beethoven, Johannes Brahms and Frédéric Chopin, as well as more modern composers such as David Diamond, Luigi Dallapiccola and William Schuman. Diamond's Piano Sonata No. 1 was inspired by Tureck's playing.