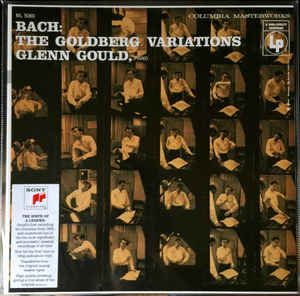 
This man is the epitome of genius. His touch, tone color, dynamics, lyricism, are all unmatched when he plays Bach. This piece is so humbling every time I hear it.

It was Landowska and Tureck two that allowed for what is arguably the most famous interpretation of the Goldbergs: Glenn Gould's 1955 recording. Inspired by Landowska's passion for early music done right, and Tureck's justified piano performance that stood out head and shoulders above the others, Gould combined the best elements of the two and added his own rhythmic and dynamic perfection to create a masterpiece of a recording. His tempi were (in general) nearly twice as fast as most performers', indeed as his own 1981 recording, which, in places, I prefer (refer to variations 1,5,10,14,16, and 29), yet he is always in control and never sounds like he's straining to get to the next note. His staccato and light touch give it wonderful bell-like clarity, and it's the closest you'll get to a harpsichord recording on a piano. Yes, his 1981 recording is more mature, but it's a difference in interpretation than technical prowess, and I think the choice between the two comes down to mood, and even, as mentioned above, to the individual variations.

This recording was his first studio recording, presenting all the fire and passion of a twenty three year old showing the world that he's got something to prove. An odd choice for a first recording, most pianists would probably be forced into some half-hearted renditions of Chopin or Mozart, but Gould knew what he was doing. He must have known that the time was right for a Bach interpretation that paid homage to the greatness achieved in the past as well as one that strode confidently into the future, a future where (in a philosophy like Landowska's) old music was no longer quaint but revered and modern music didn't seek to "revolutionize" but instead sought to build upon. This was an increasingly prevalent attitude in the 1950's and 1960's thanks to people like Landowska, Harnoncourt, and, of course, Gould. We can see this philosophy in Durufle, De Falla (one of the first twentieth century composers to write for the harpsichord), and later Stravinsky. Gould's Goldbergs played no small part in Baroque's new birth. Do yourself a favor and get both of Gould's Goldbergs, Wanda Landowska's Goldbergs, and perhaps Koroliov's Goldbergs or Tatiana Nikolayeva's Goldbergs

One of the most important classical recordings of the twentieth century (on any list) is oddball Canadian genius Glenn Goulds 1955 recording of The Goldberg Variations, a keyboard suite by J.S. Bach, master of the Baroque. Connoisseurs often point to his 1981 recording of the same work as better than the 1955. Either way, you wont go wrong. Sublime and stirring, the opening movement of the work is as soulful and beautiful as you could possibly want."


this is the only version of the aria i like. the others were played much too slowly and way too romantic. Gould is a genius!