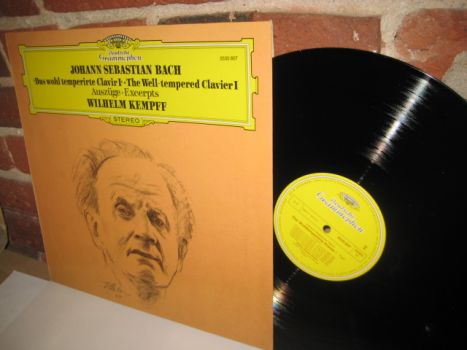 Skip to the beginning of the images gallery
Details
Wilhelm KEMPFF , piano solo , plays Bach : The well-tempered Clavier I (excerpts)

Record is VG++
Laminated Cover VG++ although bottom is split


There are few more sublime manifestations of the numinous in the mundane than Bach chorale prelude transcriptions sensitively played on the piano. Unfortunately, such things are now virtually forbidden by the authentic instrument law that does not permit Bach to be played on the piano, no matter how sensitively. In the past 20 years, there have been only two recordings of Bach chorale preludes: Murray Perahia's oh-so-sensitive performance and Paul Jacobs' just-the-facts performance. One has to reach further back than that to get good Bach.

One has to go back to Wilhelm Kempff's magisterial 1975 recording transcriptions that he himself created to get good Bach back on the piano. On this album, Kempff plays eight chorale preludes plus a transcription of the flute Sicilliano and the Largo from the Harpsichord Concerto in F minor as well a Toccata and Fugue, an English Suite, a French Suite, the Capriccio on the Departure of a Beloved Brother, and excerpts from the Well-Tempered Clavier. All of these other performances are intelligently interpreted and well played despite Kempff's 80 years. But the heart of the recital is Kempff's performance of his transcriptions. They are magnificent. All of the qualities Kempff brings to his other Bach performances are here, too, but infused with an emotional intimacy and a spiritual grandeur elevating them as prayer is above poetry. There are depths and heights in Kempff's playing that are more religious than musical, and a profundity of interpretation that is beyond the mundane and partakes of the celestial.
More Information
Please sign in with your email address or Create an Account.
New Products
Compare Products
Compare
Clear All
You have no items to compare.
My Wish List
Last Added Items
Go to Wish List
You have no items in your wish list.
Vinyl Records Vancouver
Categories
Help
Quick Link
Newsletter