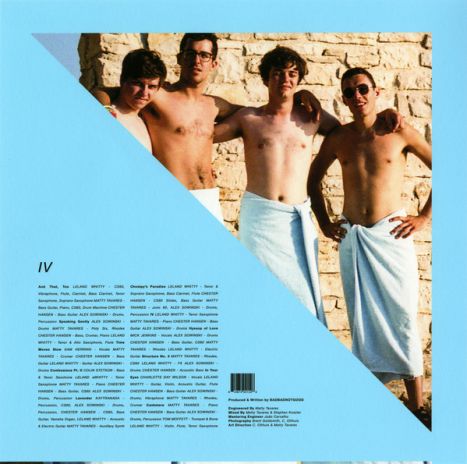 B1 Confessions Pt. II
B2 Lavender

D1 In Your Eyes
D2 Cashmere

In keeping with BBNG’s growing boundaries, they’ve invited features for the first time. In IV, they managed to rope in Future Islands’ Sam Herring, Kaytranada, Colin Stetson, Mick Jenkins, and the Toronto R&B singer Charlotte Day Wilson. And it’s in the features that you can get a real sense of how much more flexible and relaxed BBNG have become as a band.

The best of these is Sam Herring’s contribution, “Time Moves Slow,” where his gravelly voice pairs nicely with the sounds of the Crumar electric organ. It was the first indicator here that BBNG were moving away from their hip-hop roots to a more lounge-y R&B style. This continues in featureless songs like “Chompy’s Paradise,” which includes an incredibly slinky and plasticine sax solo from Whitty. It recalls all the music from The Pink Panther to “Gilligan's Island”—the sunny attitude of mai-tais by the pool, the elegance of donning an exquisitely crisp trench coat. On the ballad “In Your Eyes,” Charlotte Day Wilson strikes a middle-ground between these two dispositions. Her voice generates the murmur of a foggy room draped in cigarette smoke and the clink of martini glasses. But the surrounding instruments around her can air towards the pleasantly goofy, mixing in flute and acoustic guitar, conjuring up images of that infamous scene from Anchorman.

In fact, the jazz flute liberally peppered throughout IV offers large swaths of the music a very special brand of cornball poise. “Speaking Gently,” for example, would sound fantastic as theme music for a Vincent Price horror film. “Cashmere” collages together Dave Brubeck-inspired pianos with Bossa Nova percussion, and it’s the best example of slacker grace that these guys have been able to cultivate. It’s something that would be played in the classier sections of Rob Gronkowski's party cruise. "