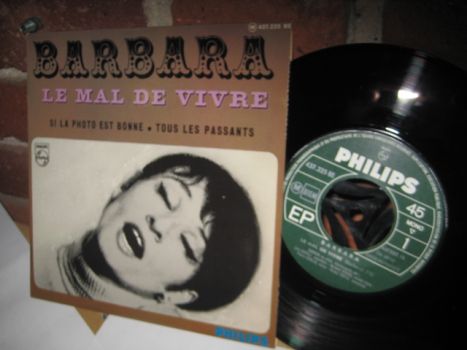 
Monique Andrée Serf (June 9, 1930  November 24, 1997), known as Barbara (Barbara Brodi in her debut), was a popular French female singer. She took her stage name from her Russian grandmother, Varvara Brodsky.

Returning to Paris, she would meet Jacques Brel and become a lifelong friend, singing many of his songs. Later, she met Georges Brassens whose songs she would eventually begin to use in her act and to record her first album. In the 1950s, she obtained singing engagements at some of the smaller clubs and began building a fan base, particularly with the young students from the Latin Quarter. In 1957 she went back to Brussels to make her first record single but...

it was not until 1961 that she got a real break when she was engaged to perform at the famous Bobino Music-Hall in Montparnasse. Dressed in a long black robe, she gave a haunting performance but the tough Parisian critics were not kind, saying she lacked naturalness and was stiff and formal in her presentation.

She continued to perform at small clubs and two years later at the Théâtre des Capucines, she captured the imagination of the audience and critics alike with an astonishingly powerful performance with new material she had penned herself. From that point on, her career blossomed and she signed a major recording contract in 1964 with Philips Records.

Although influenced by songwriters Mireille and Pierre MacOrlan, she nonetheless developed her own style and the writing of her own songs transformed her image into that of a unique singer-songwriter. Her intensely poetic lyrics, her dramatic on-stage performances, and the depth of emotion in her voice, all garnered her a huge following that lasted for more than thirty years.

It's quite a funny and ironic song.