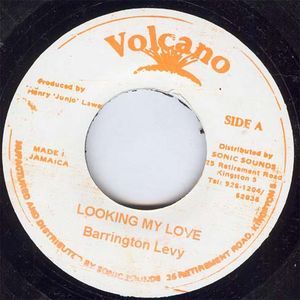 
A1 Looking My Love

Barrington Levy (born 30th April 1964, in Clarendon, Jamaica) debuted in 1975 ('77?) with the song »My Black Girl«. The single was recorded by The Mighty Multitude which was a group created and consisting by Barrington Levy and his cousin Everton Dacres. In 1977 he released »Revelation« and »This Girl of Mine« under his own name, being only 13 at the time! During the late 70's he was also a highly anticipated singer in the dancehalls. It was in one of these dancehall sessions that Barrington met (at the time unknown) producers Junjo and Jah Life.


The took him to the well known Channel One studio and recorded several songs. The first singles to be released were »Ah Yah We Deh«, »Looking My Love«, »Englishman« and »Wedding Ring Aside«. The first hit that really made a name of Barrington however was »Collie Weed«, a dancehall success. He followed it up with »Shine Eye Girl« and by now Barrington was really making a name for himself.


When Barrington album debuted it was quite confusing as he released three albums at once with the same two producers and pretty much the same material but with different mixes and some changes in the track listings. In New York Jah Life released »Bounty Hunter« (Jah Life), in London they had »Shine Eye Gal« (Burning Sounds) and in Kingston, Jamaica they had »Shaolin Temple« (Jah Guidance). The albums however proved to be real successes putting not only making people aware of Barrington Levy but also the groundbreaking producer Junjo and the highly stylistic backing band known as the Roots Radics.


Junjo had also used the highly pioneering engineer Scientist for his productions with Barrington. Junjo would work with Scientist almost exclusively for all of his productions. It is commonly regarded that these productions were regarded as the start of the Dancehall era. In 1979 yet another album produced by Junjo followed, »Englisman«. It proved to be as a big success as the three predecessors.