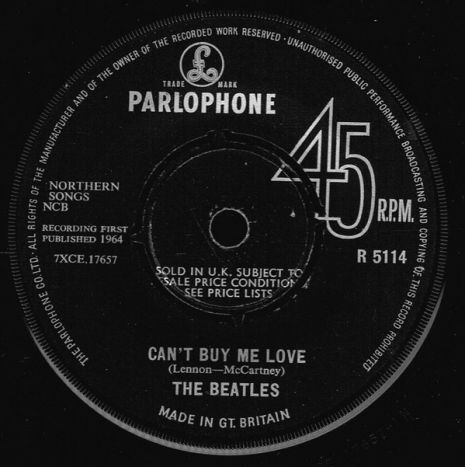 Made in Gt. Britain.

While in Paris, the Beatles stayed at the five star George V hotel and had an upright piano moved into one of their suites so that songwriting could continue.

It was here that McCartney wrote "Can't Buy Me Love". The song was written under the pressure of the success achieved by "I Want to Hold Your Hand" which had just reached number one in America.

"Can't Buy Me Love" is a song composed by Paul McCartney (credited to Lennon–McCartney) and released by the English rock band the Beatles on the A-side of their sixth British single, with "You Can't Do That" as the B-side, in March 1964. The song was then released on the group's third UK album A Hard Day's Night.

In September 2015, the Beatles donated the use of their recording of the song to People for the Ethical Treatment of Animals for a television commercial