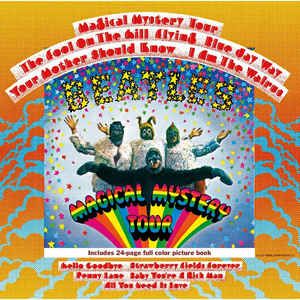 
The album has been re-mastered by a dedicated team of engineers at EMI's Abbey Road Studios in London over a four year period utilising state of the art recording technology alongside vintage studio equipment, carefully maintaining the authenticity and integrity of the original analogue recordings. The result of this painstaking process is the highest fidelity the catalogue has seen since its original release

Magical Mystery Tour is an album and double EP by the English rock band, The Beatles, first released in late 1967. The double EP was recorded at the end of an extremely creative 18-month period.

For a change, the Magical Mystery Tour versions released in the U.S. and Canada were superior to the UK version, which was more or less an EP. The U.S. version gathers some key singles from 1967 (Strawberry Fields Forever and Penny Lane) and makes this a great LP.

The Beatles were still up to their studio tricks, using lots of orchestration, backwards cymbals, unusual instruments, etc. and each song is again unique. This LP also has some of Ringo's finest drumming.

Highlights include:
"Strawberry Fields Forever" with John Lennon singing about a place near his home in Liverpool. A great thing about Lennon penned tunes was that he always included the listener on the journey. "Let me take you down..." Trippy and introspective, with slowed down tape to deepen lower his voice, then pieced together with another faster track in a different key. Great combo of rock instruments and orchestra. Great drum dynamics, especially the ending reprise and fadeout.
"Penny Lane" is Paul's Liverpool trip, a cheerful tune with some nice lyrical twists like "four of fish and finger pies" and "a pretty nurse is selling poppies from a tray." Also like the horns, especially that solo.
"All You Need is Love" is a perfect ode to the 1967 "Summer of Love."
"The Fool on the Hill" ranks among Paul's better lyrical efforts. "The man of a thousand voices talking perfectly loud." Nice recorders.
"I Am The Walrus" is one John Lennon's all-time best Beatle tunes, with, as another reviewer stated, nonsense lyrics that somehow make sense. This is the quintessential combo of rock meets orchestra that has been imitated ever since the Beatles perfected it. Great drum performance by Ringo.

"Magical Mystery Tour" is a good intro piece, with horns, harmonies, and great drums. I always wondered what it would have been like to hear an extension of that piano jam at the end fadeout.
"Baby You're a Rich Man" Nice beat and piano line. This must be an early use of the expression "one of the beautiful people."

The rest:
"Flying" is a trippy little instrumental with a good bass and drum groove and slinky guitars that transforms into a spacey trip of sound effects.

"Blue Jay Way" is a hazy George Harrison piece about waiting for someone in L.A. I like the progressive building of tempos and drums.
"Your Mother Should Know" is another catchy, piano-driven Paul tune that was probably considered a "granny song" by John.