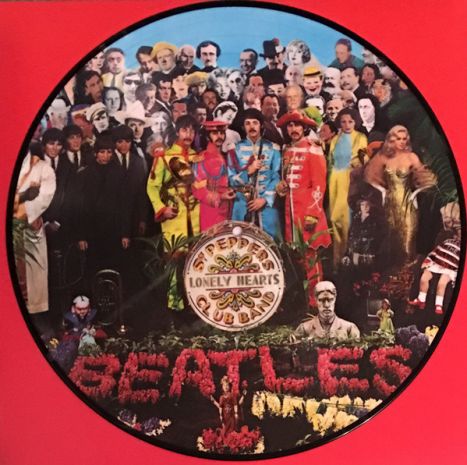 " Sgt. Pepper's Lonely Hearts Club Band is the eighth album by The Beatles. It is often cited as the most influential album of all time by prominent critics and publications, including Rolling Stone (which put it atop their 500 "Greatest Albums" list in 2003). It was recorded by The Beatles over a 129-day period beginning on December 6, 1966.
The album was released on June 1, 1967 in the United Kingdom and on June 2, 1967 in the United States.

Upon release the album was an immediate critical and popular sensation. Innovative in every sense, from structure to recording techniques to the cover artwork, the artistic effect was felt immediately.

During a recent TV special, it wa said that, during the time the Beatles were in the studio making "Sgt. Pepper...", there was a lot of doubt about what they would come out with and many fans were giving up on them. .

Of course, the Beatles always had a few doubters and detractors, but most of us were looking forward to their next record.

Stories of how much time and effort were going into it only fueled our anticipation.

It was like the release of the fourth Harry Potter book when "Sgt. Pepper..." finally came out.

Some stores opened early and huge numbers were sold the first day of it's release. .

To appreciate the significance of "Sgt. Pepper..." you have to understand the pivotal place of the Beatles in the culture of the time. Quite simply, they changed everything.

Before the Beatles, the primary medium of pop/rock music was the 45 rpm single. The Beatles released a flood of good quality songs, many original, so that "albums" became more than just a couple of hit singles packaged with a bunch of throwaway tracks.

All of the tracks were good and people began to buy albums because it was the best way to get all the music.

"Sgt. Pepper..." took this a step further by making the album a more unified whole. It elevated pop/rock music to the level of art, implying an expressiveness and timelessness beyond anything rock had previously aspired to.

But the impact of the Beatles went far beyond music. It entered into fashion, modes of behavior, and popular attitudes in a variety of areas. We were even fed a constant stream of news reports about what the Beatles were doing from day to day or week to week.
London became, for a time, THE cultural center of the world.

They weren't even the only ones at Abbey Road Studios. However, they were the best. With the help of producer George Martin, the Beatles used or invented every studio trick available to create arguably the most original and otherworldly sounding album of all time. Between the opening murmurs of the anticipating crowd on the title track and the spliced tape groove at the end lies a lesson in modern music. The Beatles sonic scope expands and contracts effortlessly with horns, harps, orchestras and even a rooster weaving a web of daringly original music. The album oozes highlights.
In particular, the question and answer "With A Little Help From My Friends,"

The hallucinatory "Lucy In The Sky With Diamonds,"

The suggestive "Lovely Rita," the circus fantasy "Being For The Benefit of Mr. Kite!"

and the gleefully optimistic "Getting Better" are all masterfully guided by Paul's incredible bass work.

The sudden, empty-nest sadness of "She's Leaving Home" is heartbreaking.

The swirling meditation of "Within You Without You" is transcendent.
The man on the scene "Good Morning Good Morning" is vibrant and energizing.
Sgt. Pepper majestically concludes with one of the last true Lennon/McCartney collaborations, the sprawling genre defying epic "A Day In The Life." Words can't do the album justice.

For those of us who were around and listening when "Sgt. Pepper..." came out, it is more than just a record
It marks the peak of a time of incredible energy and change.

The decline and dissolution of the Beatles is something many of us still feel in a very personal way.
Even today, we mourn the end of the Beatles and the death of John Lennon.

Those events represent the passing and final end of something we treasured.

"Sgt. Pepper..." is a great record by a great band. Even more, it is a central landmark of its period and of its genre. If you think you like rock music, but you don't have a copy of "Sgt. Pepper...", sorry but you've missed it. Get a copy. You can't really appreciate the Beatles without it

Upon release the album was an immediate critical and popular sensation. Innovative in every sense, from structure to recording techniques to the cover artwork, the artistic effect was felt immediately."