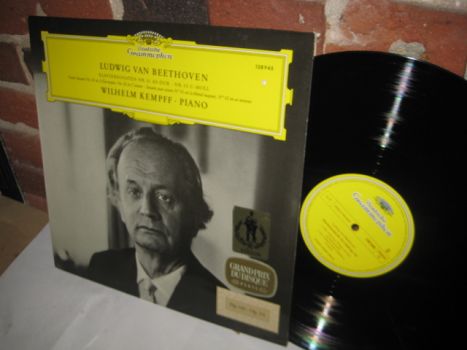 
Kempff's playing, along with that of several of his contemporaries like Gieseking, Schnabel and Wuhrer, has a refinement inherited from the 19th century; a refinement I find lacking in some modern performances, aspects of which can be unpleasantly brash by comparison. He was 70 years old when he made these recordings and which may account for a more contemplative approach to some works but age has not dimmed the sparkle of bravura passages.

Of the complete sets of 32 (this one, Arrau, Schnabel, Barenboim [EMI], Fischer and Gilels [nearly complete]), this one from it is my all around favorite.


While he lets every note ring out beautifully, he does not allow his listener time to soak in the slower parts, such as the beginnings of the final movements of Op. 109 and Op. 111 as well as (and much more imporantly so) the adagio in Hammerklavier. This Adagio is undeniably a masterpiece - it goes through periods where it floats along pensively and wistfully to points where it bleeds with dark eroticism.

The fugues of Op. 110 and Hammerklavier, as well as the variations in Op. 111 are so magnificently and brightly portrayed, that it is impossible for me not to be taken by them every time I hear them
More Information
Please sign in with your email address or Create an Account.
New Products
Compare Products
Compare
Clear All
You have no items to compare.
My Wish List
Last Added Items
Go to Wish List
You have no items in your wish list.
Vinyl Records Vancouver
Categories
Help
Quick Link
Newsletter