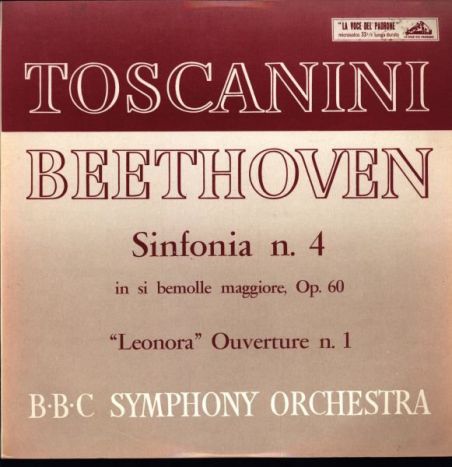 Arturo Toscanini made a series of commercial recordings for His Master's Voice in Great Britain from 1937 to 1939. He conducted a number of concerts with the BBC Symphony Orchestra (now known as the BBC Philharmonic orchestra) in the 1930's and reportedly enjoyed working with the British musicians. Some of the musicians later recalled the warm relationship they had with the Maestro, who clearly admired their abundant musical talents.

Often the comparison was made to Sir Thomas Beecham, who actually had a much different style than Toscanini (and was critical of the Maestro), because both were said to have "an inner vision" that came across in the ways they shaped performances of the great classics they conducted. Both men weren't afraid to conduct "light classics," which Beecham called "bon bons," and treat them with great respect and imagination.

Toscanini's BBC recordings were made in Queen's Hall, a wonderfully warm, resonant concert hall that was unfortunately destroyed in 1941 during the Battle of Britian. The recordings were released in America by RCA Victor. They give us a good idea of Queen's Hall's fine acoustics.

Knowing that Toscanini hated making 78-rpm discs because of their limited playing time (and the need to stop to the change a master every four to five minutes), HMV engineers set up two recording machines and recorded continuous performances. They simply faded or cut off one master when it reached its capacity and started a new one on the other machine.

Toscanini appreciated the ability to conduct such continuous performances and he was quite pleased with the results. He was so "relaxed" during the recordings that he occasionally hummed, as he sometimes did during his concerts. The discs had remarkably good sound, too, and still sound quite impressive
More Information
Please sign in with your email address or Create an Account.
New Products
Compare Products
Compare
Clear All
You have no items to compare.
My Wish List
Last Added Items
Go to Wish List
You have no items in your wish list.
Vinyl Records Vancouver
Categories
Help
Quick Link
Newsletter