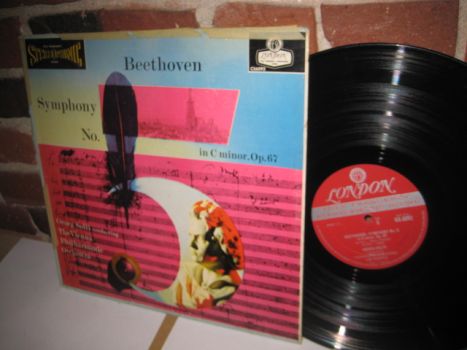 Skip to the beginning of the images gallery
Details
Beethoven - Symphony No. 5 in C minor, Op. 67
with the VPO conducted by Solti.

London Records ( Says on label MADE IN ENGLAND))
Record VG VG+ quite alot of marks but you can still hear the fantastic recording quality even with the pops a ticks
Cover is VG, taped on all sides

Dating from the late fifties, these generally fine performances show Solti's consistency as a Beethoven interpreter. In fact, timings are virtually identical to his later versions (give or take a repeat or two). Even in at this comparatively early date, a craggy directness entirely appropriate to Beethoven characterized the conductor's approach, and how many contemporaries at the time took the exposition repeat in the Eroica's first movement? Solti's Beethoven has always been underrated. In some respects it's more satisfying than his ventures into the late Romantic repertoire on which his reputation largely rests. His Fifth Symphony, for example, has all of the drama and flair one could ask for in its outer movements,


The symphony soon acquired its status as a central item in the repertoire. As an emblem of classical music, as it were, the Fifth was played in the inaugural concerts of the New York Philharmonic on December 7, 1842, and the National Symphony Orchestra on November 2, 1931.

Groundbreaking both in terms of its technical and emotional impact, the Fifth has had a large influence on composers and music critics, and inspired work by such composers as Brahms, Tchaikovsky (his 4th Symphony in particular), Bruckner, Mahler, and Hector Berlioz.

The Fifth stands with the Third Symphony and Ninth Symphony as the most revolutionary of Beethoven's compositions.
More Information
Please sign in with your email address or Create an Account.
New Products
Compare Products
Compare
Clear All
You have no items to compare.
My Wish List
Last Added Items
Go to Wish List
You have no items in your wish list.
Vinyl Records Vancouver
Categories
Help
Quick Link
Newsletter