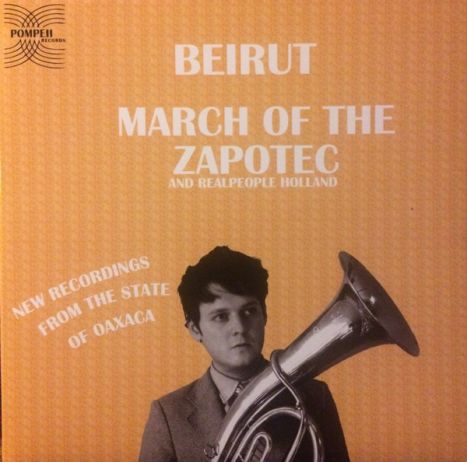 Beirut - March Of The Zapotec

Realpeople - My Night With The Prostitute From Marseille
3:07


21 year-old Zach Condon (a.k.a. Beirut) is something of a prodigy. Performing and recording music as a teenager seemed to interest him more than school: he promptly dropped out and went travelling around eastern Europe.

Before recording as Beirut, Condon went by Realpeople for his bedroom recordings, and he has revived the name for the second half in this collection,

March of the Zapotec (and Realpeople: Holland) is comprised of two extended players spliced together to make one long player. This long player may or may not stand as Beirut's sole musical statement this year and it's a strange one. The first 6 tracks (or March of the Zapotec) are basically in indulgence of accordion harmonics with occasional structure (such as the outstanding "The Akara"). Beirut may be the only person making music in the popular sphere that can make the accordion (or something that resembles it) sound good but juxtaposing arrangements drenched with it next to a more immediate set of songs is a jolt and it makes for uneven listening. Those that appreciate strangeness will find value in the first set of arrangements but it'll be difficult to fairly compare them to the last group of songs on this album. The Realpeople: Holland songs (as far as listening pleasure) are the superior section of this EP suture. "My Wife, Lost in the Wild", "Venice" and "The Concubine" are three of the best songs Beirut has ever released and suggests deftness with electronic arrangements that was only hinted at on his first two albums.
Frankly, this album was weighed back into excellent territory because of the strength of the last half and releasing the EPs together ensures more saturation of some of his best work, so this album was a good idea and can stand next to his proper releases.
Beirut's ambitious, that's for sure and his understated genius is hard to find elsewhere, that's why he caught on so generously a few years ago. He proves that musical vision is the key and not just trendy music equipment.

It's not a trumpet, it's a rotary valve flugelhorn

the animator wanted to communicate the tone of the music and the feel of the story through a less than high resolution, fast framed medium.
Beirut is simply amazing! March of The Zapotec is my favorite album

Beirut - March of the Zapotec / Holland