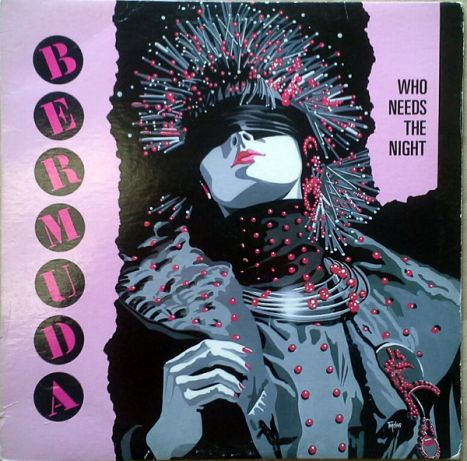 Bermuda ‎– Who Needs The Night

Hyper rare release from this female-fronted act from Vancouver, BC.

This five-song EP is exquisitely rare. The band played a pure 1980s sound with those keyboards and synths that everybody loves, plus they had one of the best female lead vocalists I've ever heard. The record opens with the energetic AOR rocker "Video Hero", a true standout. Then we have the only ballad "Someone So True", sung by guitarist Bob Hansen. The title track is also catchy with some synth horn hits. Side B opens with "Elegant Dancer", a fluffy new wave rocker with sparkling keyboards. "Go It Alone" has a slight Westcoast AOR vibe and still keeps those keyboards working. The lead singer Donna Gagnon (real name Donna Caruk) sung for a short-lived Vancouver band called Army in the early 1980s before forming Bermuda, and she's still performing today in a Heart cover band. Drummer Rob Neumann and keyboard player Steve Weakes are also out there making music.