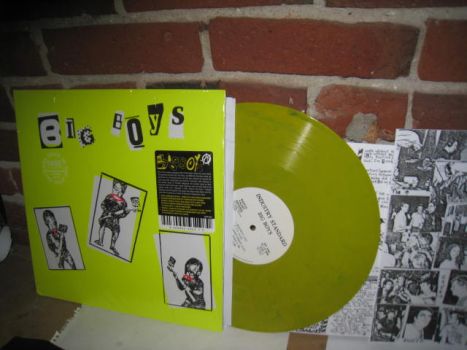 Includes reproductions of a rare Big Boys sticker (shown above), original inserts, plus a new insert with a note from Big Boys founding member Tim Kerr


The Big Boys were formed in 1978 in Austin, Texas by three skaters: Tim Kerr (guitar), Chris Gates (bass), and Randy "Biscuit" Turner (vocals). They would go through a number of drummers before breaking up in 1984. In that time the Big Boys put out three full-lengths, a 12" EP, a split live LP with the Dicks, and the classic debut single Frat Cars. Every record is essential listening. Their sound (dubbed "neo-bopism" by producer Spot) was constantly evolving, combining odd elements of punk, funk, and pop to create diverse and totally unique music. They were also a key band in establishing "skate punk" as a genre and a community. They were also one of the first bands involved in the skatepunk scene, appearing in Thrasher skateboarding magazine and in Thrasher's videos, and had their own Big Boys skateboard. After a Bad Brains show in Austin that ended in controversy involving Biscuit (and later inspired the song "Pay to Come Along" by MDC), conflicts began to arise within the band, specifically between Biscuit and Chris. The Big Boys played their last show very unexpectedly. Biscuit and Chris never spoke to each other again.


The Big Boys toured the US a couple times and also set up shows in Austin for out of town punk bands. Along with the Dicks, they were the center of the Texas punk scene. Biscuit (like Dicks singer Gary Floyd) was fairly open about being queer and regularly appeared on stage in drag. Big Boys shows were orgies of theatrics: costumes, props, and audience participation were to be expected. For some home town shows a horn section would join in. Their anthems "Fun, Fun, Fun" and "We've Got Your Money" were notorious for getting the crowd onstage and singing even after the show ended with Biscuit ordering "Now y'all go start you own band!"


For me the Big Boys are the definition of the Do It Yourself (DIY) ethic, what punk rock should be. They didn't play by any rules, including the punk or hardcore rules, but not in that "anti-PC" way the Meatmen did, or in the pretentious "I hate the kids" attitude that Rollins and his ilk pushed. The Big Boys were defiant but also totally inclusive. The purpose behind their always changing music, stage presence, and instantly recognizable artwork was to inspire others to be creative. "I'm a punk and I don't care..." Biscuit sang in "Fun, Fun, Fun": "...Cockney Rejects are the world's greatest band. But I like Joy Division and Public Image too, even though it's not what I'm supposed to do."


Musically there are few bands that can touch the Big Boys. They could do snotty punk ("Frat Cars", "Identity Crisis"), singalong anthems ("Fun, Fun, Fun," "We're Not In It to Lose"), raging hardcore ("Gator Fuckin," "No Love," "Fight Back"), pure funk ("White Nigger," "What's the Word?'), or introspective melodic pop ("Which Way to Go," "Sound on Sound," "Influence") as well (and usually better) than the leading bands playing only those styles. Many ideas that were later hailed as revolutionary when copied by mainstream bands (most notably the Red Hot Chili Peppers) were done better and earlier by the Big Boys, who were punker, funkier, crazier, sexier, and more inspirational than the entire Rolling Stone/MTV/VH1 canon of prefab rock schtick put together. The individual Big Boys all continued to make music in various capacities after breaking up, many of these projects are documented in the liner notes of the posthumous Wreck Collection LP of outtakes and rarities. Nothing captures the unique energy and totally radical approach to music and art that make the Big Boys my favorite early punk band.


Also known as Industry Standard, the Big Boys' first full studio effort may not have as much force as other efforts on a bigger budget, but it still kicks with a fun, righteous fire. Compared to hordes of forgotten early punk records on small labels, Towel towers over them due to the great musicianship of the band and their lack of fear in doing something different as they felt the inspiration.


As a group, the Boys seemed to have a fascination with being on the edge of going just a little crazy; "Identity Crisis" and "Self Contortion" hint at the frazzled edge which Turner can bring to the fore even at his calmest. His great, strangled-but-powerful vocals offer up tons of sharp images from when punk really was a matter of individually standing out in a crowd (check out the hipshaker/handclapper of "Spit," especially his mid-song testimony).

The rest of the band aren't so much interested in kicking in skulls all the time as they are at also hitting a sharp, spare groove. "I Don't Wanna Dance" is brilliant in this regard, Kerr offering up a snotty vocal of a scenester who is too cool to shake his thing, while the music makes a listener want to do just that, especially the smooth breaks after each verse.


"Thin Line" is another solid standout, with Kerr's chiming then quickly plucked guitar notes shooting over Gates and Murray's cool rhythm work. Gang-shout choruses crop up on many a song, but instead of Sham 69-bellowing, things are more call-and-response between Turner and the rest, even on the more straightforward hardcore of "Security" and "Advice."


When Turner and Kerr trade off vocals on "Complete Control" (not a Clash cover), their voices, along with the great music results in as distinct and great a punk-inspired song out there as any that have ever been recorded, all while sounding like nothing what the mainstream would ever consider "punk."