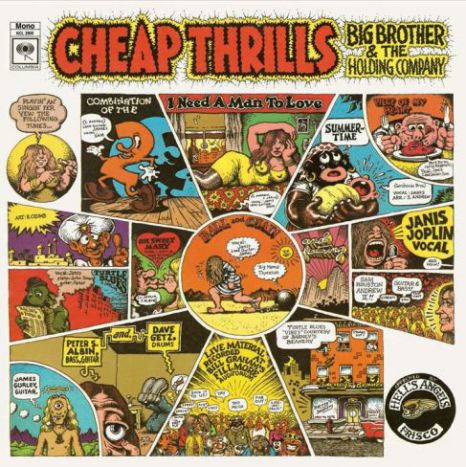  Sourced from the Original Mono Master

Evolving out of the San Francisco rock scene of the 1960s, Big Brother was in the forefront of the psychedelic music movement.

The band was formed by Peter Albin, Sam Andrew, James Gurley and Chuck Jones in San Francisco, in a Victorian mansion/boarding house owned by Peter's uncle at 1090 Page Street in the Haight-Ashbury. That house became the site of Wednesday night jam sessions which were organized by Chet Helms who was the real "Big Brother," naming the band, bringing James Gurley into the fold and later seeing that his old friend Janis Joplin came to sing with them. The band had what Sam Andrew callled a "progressive-regressive hurricane blues style."

During the winter of 1966, Chuck Jones left the band and was replaced by Dave Getz who played his first gig with the band on 12 March at the Matrix on Fillmore Street. Peter Albin was the main vocalist at this time, and although Sam Andrew helped out with the singing, both men knew that the band needed a singer who could match the group's instrumental energies. Chet Helms remembered a friend from his University of Texas days, Janis Joplin, and proposed that he bring her back to San Francisco, where she had tried to launch a singing career in 1963-1964. Janis came to town, sang a couple of tunes with the band at their Henry Street studio, and was enthusiastically welcomed into the group.

Big Brother acquired a new manager at Monterey, Albert Grossman, who brought them to Columbia Records.where they made their second album Cheap Thrills which was number one on the charts for eight weeks. The music on the album was energetic and driving, the perfect match for Joplin's voice. Guitar Player magazine called James Gurley the "Father of the Psychedelic Guitar," and Rick Clark in the All Music Book wrote "Anyone who thinks Guns N'Roses mastered hard electric blues-grunge hasn't heard Big Brother's James Gurley and Sam Houston Andrew duke it out on tracks like 'Ball and Chain,' 'Summertime,' and 'Combination of the Two.' "

"Cheap Thrills, the major-label debut of Janis Joplin, was one of the most eagerly anticipated, and one of the most successful, albums of 1968... sporting a Robert Crumb cover on its gatefold jacket that constituted the most elaborate album design ever lavished on a rock album from Columbia Records... it shot into the charts, reaching number one and going gold within a couple of months, and 'Piece of My Heart' became a Top 40 hit and helped to propel the LP to over a million sales. Joplin, with her ear- (and vocal cord-) shredding voice, was the obvious standout. Nobody had ever heard singing as emotional, as desperate, as determined, or as loud as Joplin's, and Cheap Thrills was her greatest moment... Heard today, Cheap Thrills is a musical time capsule and remains a showcase for one of rock's most distinctive singers." - William Ruhlmann, allmusic.com

"Big Brother and the Holding Company was a prime example of a band where the chemistry was right, where the whole was greater than the sum of its parts. You cannot buy or manufacture the natural feeling that was in that band. Big Brother played from the heart and soul with the goal of achieving a direct connection with the innermost feelings of the audience." - Sam Andrew

Combination of the Two" starts the album off with a bang, then segues into "I Need a Man to Love", what I think is the best song on the original album! "Summertime" and "Piece of My Heart" are classic Janis standards, "Turtle Blues" goes back to Janis' Texas roots, "Oh Sweet Mary" gets as acid-rock as you can get, and "Ball and Chain" finishes off what has been quite an experience!

Janis and Big Brother and the Holding Company recording Summertime for their Columbia album Cheap Thrills. The album was released in late 1968 and sold over one million copies that year. Shortly after the release of Cheap Thrills, Janis left the band to persue a solo career in music.