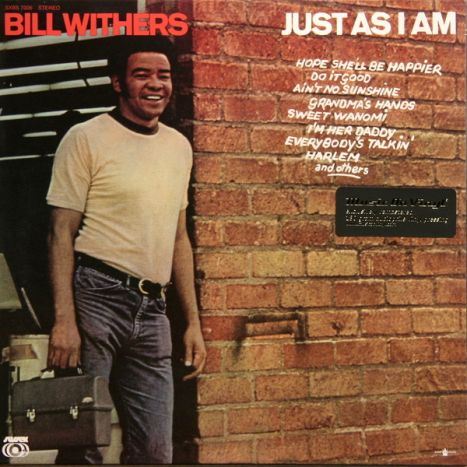 Bill Withers - Just As I Am

"It Matters Not Where I Came From In Relation To The World, As Long As The World And I Arrive At A Common Point At A Common Time. I Would Like To Thank Sussex Records And Booker T. Jones For Allowing Me To Present Myself To The World, To Whoever Is Kind Enough To Listen:
Just As I Am. Bill Withers"

"It Matters Not Where I Came From In Relation To The World, As Long As The World And I Arrive At A Common Point At A Common Time. I Would Like To Thank Sussex Records And Booker T. Jones For Allowing Me To Present Myself To The World, To Whoever Is Kind Enough To Listen:
Just As I Am. Bill Withers"


Bill's songwriting and composition style is very much his own. Stylistically very much based in the folky blues very accessible to the singer/songwriter era his songs also utilize plenty of instrumentation of the funk/soul era such as cinematic orchestrations,slowed afro-cuban type percussion and a style of songwriting that is extremely memorable. On "Harlem",the harrowing "Better Off Dead" and covers of "Everybody's Talkin'" and "Let It Be" the gospel/funk element of his sound comes out in these tales of hope,hopelessness as well as the have and the have nots of life. The big hit of course was "Ain't No Sunshine". This song as well as "I'm Her Daddy","In My Heart","Moanin' And Groanin'" showcase his love of the blues and his interest in advancing the for very much his own way. Of course no better is that heard than on "Grandma's Hands". This is a strongly autobiographical song about his church going grandmother assisting single mothers and generally being a positive influence on his life. It emphasizes the value his places on the feminine influences in his family as well. My own two favorites here are "Do It Good",a blues/jazz/funk number with some great vocal harmonies that might've influenced people like Steely Dan later. Also the beautiful and bittersweet "Hope She'll Be Happier",with it's wonderfully written chord changes.

At this particular time one could say Bill Withers was presenting himself somewhat in the same context as James Taylor was at the time. As a singer/songwriter with strong roots in soul and the blues and an unintentional commercial touch. I say that with Bill because his intent with putting his songs out there was more to communicate with the record buying public than to pander and patronize to them. And that proved an excellent thing. Produced by Booker T Jones this was one of the most artistically and commercially successful debut albums of the early 1970's. And it was certainly a triumph for Bill Withers as well. He had done his bit,worked his way up the ladder and won out in the end. Interesting enough a decade and a half later,he'd reject it all on a matter of creative principle. Now a lot of people only give lip service,at best,when it comes to their commitments to creative vision-over-record sales. But with Bill it was all about the songs. Was then and still is today. In fact he has been extremely earnest in not recording until he is able to say what he wants to. He was the perfect soul man really for this era. It was a time when the 60's era thought process was becoming more the mainstream than the fringe of society. And Bill's honest and open songwriting and very hummable melodies were just as communicative and full of humility as music of most eras could ask for.