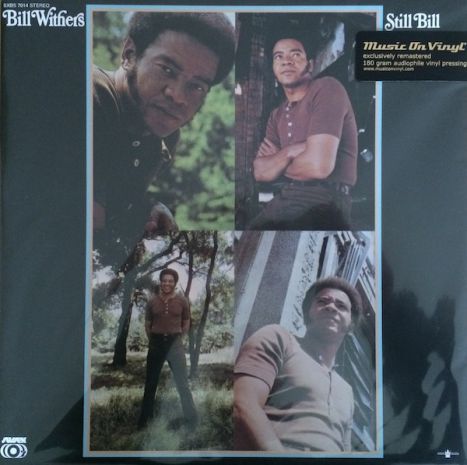 Comes in a normal plastic wrap (as opposed to a plastic shrink-wrap) with a black Music On Vinyl sticker, mentioning "exclusively remastered" and "180 gram audiophile vinyl pressing".

Country:
Europe
Released:
2012
Genre:
Funk / Soul
Style:
Soul, Funk
The "Pressed By" identifier is uncredited, but identified by the etchings in the runout area.

One of my all-time favorite albums. Following his big surprise hit with "Ain't No Sunshine," Withers insisted on the right to produce his follow-up album, and the results, as you can hear, were stellar.

He rounded up some pals from the Watts 103rd Street Rhythm Band, guys that he jammed with regularly in the 'hood, and the tight, compact ensemble sizzled their way through his latest set of plainspoken, soul-piercing funk ballads.

Led by the #1 Pop and R&B smash "Lean On Me" and the follow up "Use Me"(#2 Pop and R&B)the whole album has a great laid back, funky feel. My personal faves besides the two big hits are "Who Is He, And What Is He To You" recently covered by Meshell N'degeocello, also the touching "Let Me In Your Life, and the groove "Kissing My Love" whose beat was lifted by Dr. Dre on "Let Me Ride" and on Tara Kemp's "Hold Me Tight

"Lonely Street, Lonely Town" is another fine example of Wither's empathic humanist world view, a soft folkie sentiment with a killer funk groove to back it up.

Bill Withers - Use me

Mr.Bill Withers; Use Me
Not only the words to this song is good,
BUT the band is great!