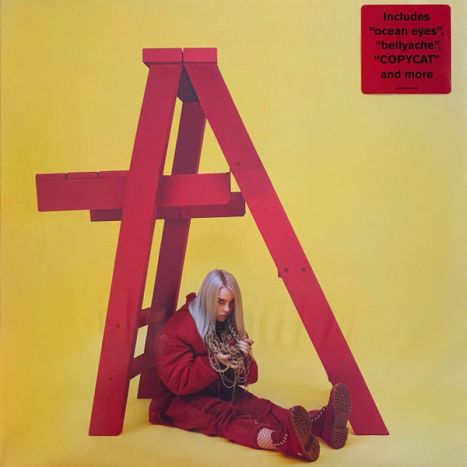 A1 Copycat
A2 Idontwannabeyouanymore
A3 My Boy
A4 Watch

B1 Party Favor
B2 Bellyache
B3 Ocean Eyes
B4 Hostage

Billie Eilish is arguably one of the most influential and interesting artists in the new wave of pop music.

The nineteen-year-old made it big when she uploaded her song Ocean Eyes online back in late 2015, created in her own home with the help of her brother and producer Finneas O’Connell. She gained attention quickly for her calming vocal style, edgy, melancholic or dark underlying meanings, and the dream-like quality of her music, which is becoming a trend in many modern pop songs.

She was signed by a major record label at the young age of 14, where she officially released Ocean Eyes and her follow-up single, Six Feet Under, an atmospheric pop ballad.

Billie explores more with music in her massively successful 2017 EP, Don’t Smile At Me. Her creative process is still raw and authentic. However, we see her taking risks with the type of sounds and lyrics she incorporates into the songs, which is one of the things that make this project so enjoyable to me and many other fans. In the EP, we hear stories of confidence, love, and heartbreak told through Billie’s compelling musical persona.

There’s a little bit of everything in this noteworthy debut project. Songs like COPYCAT and My Boy use elements of hip hop, such as the flow and bass in the songs, and show a confident, self-assured perspective.

In COPYCAT, for example, Billie compares herself with a girl who copies everything she does, with witty lyrics like “you’re italic, I’m in bold,” implying that she is better than the copycat. I personally really enjoyed the rhythm and bass in the song. They increase in intensity as the song progresses, which made it quite a catchy and fun listen.

Meanwhile, Bellyache is the most popular track among fans, and for good reason. It’s a cheerful sounding EDM tune with a dark undertone of guilt and crime. The acoustic guitar, ambient noises, mesmerizing vocals, and the beat drop take you to a bright, yet mysterious atmosphere that I haven’t seen in many other mainstream pop songs. The EP also contains Ocean Eyes and a song with similar vibes called Hostage. These songs are my favourite tracks from the EP, featuring a dreamy, abstract vibe and well-crafted lyrics. I was especially impressed by the lyrics in Hostage, such as “just let me hold you like a hostage.” She uses clever metaphors and symbolism to describe a possessive and obsessive character. Altogether, the songs are simple and fun to listen to and make a cohesive, well-crafted EP. For fans of pop, alternative, EDM, or hip-hop, this project is definitely worth the listen. It would be interesting to see Billie experimenting with a more solid and sophisticated style in her future works. As a whole, though, I rate Don’t Smile At Me with four and a half stars for the variety it incorporates and how well-made and unique and diverse the songs are.