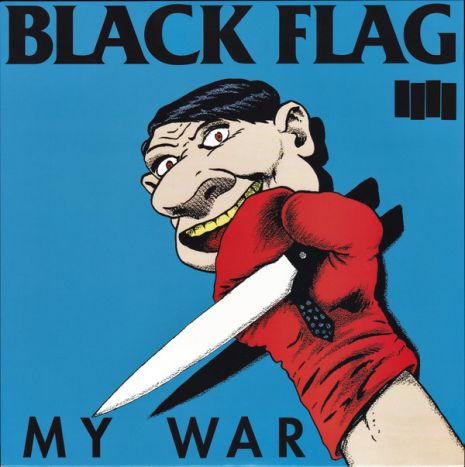 
Anger, depression, paranoia and despair. These themes were all explored before the release of "My War", the mammoth second album by Huntington Beach pioneers Black Flag. There may have even been some dramatic lip service given to the concept of emotional collapse and the experience of hitting zero degrees psychologically--But this was something quite different. Far from a superficial examination of the ambiance of alienation felt by their audience at the time, "My War" quickly establishes the bands ability to capture the zeitgeist in this non-trivial and genuinely unsettling presentation. Lock yourself in a darkened room alone with your torment and a bottle of Jack Daniels, then turn it up way past eleven and JUST FEEL IT!

"Nothing Left Inside" by itself is a gauranteed purgation of sorrow for those contemplating the value of continued existence.But that's just the tip of the ferocious iceberg. "Beat my head against the wall", "Can't Decide", and the pummeling title track are all frightening representations of schizophrenic energy. At once both detached and passionate.

To be sure, there is musical evolution to accompany the harrowing lyrics of a very young and very tortured Henry Rollins. Here guitarist Greg Ginn provides the perfect Yin to Rollins Yang in the form of sludgy, Sabbath like punk blues rock, which was unique to the Flag during the early to mid-eightees. During all this innovation their contemporaries were more than happy to hide behind the pandering assurance of blinding speed and virtual anger. "Damaged", the groups previous album, was notable only for its mastery of punk convention.
But on "My War", they actually transcend mere posturing to bring the listener a tangible and disturbing intimacy with neurosis unleashed. Heavy indeed.


Black Flag - I Love You


Black Flag - Nothing Left Inside