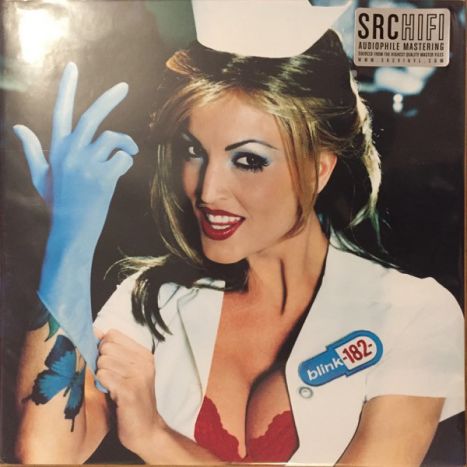 A1 Dumpweed
A2 Don't Leave Me
A3 Aliens Exist
A4 Going Away To College
A5 What's My Age Again?
A6 Dysentery Gary

"On their 1997 release, Dude Ranch, juvenile hardcore-pop band Blink 182 tickled the funny bone with an assortment of dumb sex jokes, off-colour artwork and between-song skits, including one of a dog drinking from a freshly peed in toilet. So, two years down the road, have the band matured at all? One look at the cover of Enema Of The State, which features cover art of a tarted-up blonde nurse donning a rubber glove, provides the easy answer. Fortunately, Enema supports the humour with strong musicianship. The songs are more dynamic than those on Dude Ranch, sounding like a cross between the Descendents and Fountains of Wayne. " (amazon costumer)

" Blink 182's brand of punk is best represented on Enema Of The State, and every song here is fun, silly (except for "Adam's Song"), and hard driving, as it also is on their followup live album, the Mark Tom and Travis Show.
"Dumpweed," the two singles "What's My Age Again" and "All The Small Things" are , but the rest of the songs have such equal merit that they could just as well have been singles, plus they are distinguishable from each other. A goofily immature picture is painted in "What's My Age Again" on the protagonist turning on the TV just as the girl is ready for some sex. The immaturity of this guy is well-portrayed here.
The alien abduction/CIA conspiracies are explored in "Aliens Exist." Lyrically, there are some key lines that elicit a raised and impressed eyebrow. "Going Out To College" is sung from the p.o.v. of a clumsy geek in college: "The world's an ugly place/but you're still beautiful to me." And the preceding line is a moment of awkward sincerity: "And I'm so unprepared, so here's your valentine/Bouquet of clumsy words, a simple melody" And in "Dysentery Gary," the frustration at losing a girl to a slimeball results in the lyric: "F--- this place, I lost the war, I hate you all, your Mom's a whore."
"Adam's Song" tackles the topic of suicide with lyrics veering from serious "I'm too depressed to go on/You'll be sorry when I'm gone" to goofy "Remember the time I spilled the cup/of apple juice in the hall."
Party life is the theme on "The Party Song" and "Anthem." Shallow, false image giving, game playing, 'look but you can't touch' girls are trashed in the former to my delight. Rebellion against inattentive parents are touched on in the latter. The four bonus live tracks on this import rival the energy of the MT&T show." (amazon customer)