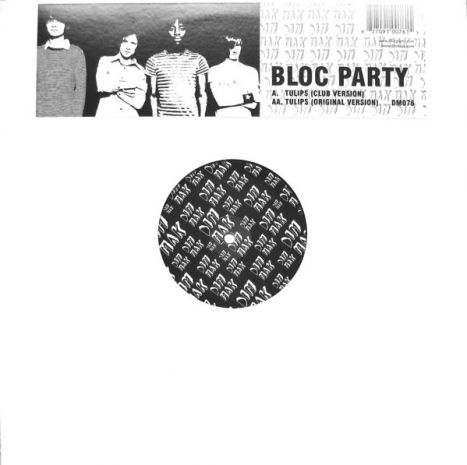 
A SIDE
TULIPS (Club Version)

B SIDE
TULIPS (Original Version)

Bloc Party is an autonomous unit of un-extraordinary kids reared on pop culture between the years of 1976 and the present day. Like many such kids, between them they eventually concluded that their own attempts to imitate what had informed them could be construed as a worthy variation on the many forms that preceded. They do everything that's required to conform to the currently received ideas of what a band is: ostensibly to play instruments at the same time, but also have a title for the work created.
Kele picked up a guitar when his hands enabled him to do so and his brain gave him the inclination. Russell had already done as much beforehand when they met in 1998. In the fine print of music papers and in telephone conversations they enabled meetings with Gordon and Matt who also had ideas of some relevance to bring to the collective effort. In this sense a band was created.


Henceforth should follow a list of auteurs and musicians that figured in the formative minds of the four as they went about their work. But to do as much seems churlish in an already self-referential world. Suffice to say there would be no band without the efforts of guitar bands formed in British and American towns in the 70s, 80s and 90s, aswell as visionary writers and artists of various kinds whose work has informed the world and culture itself as it stands. The precise names are as good as any you can come up with, in fact probably much, much better.