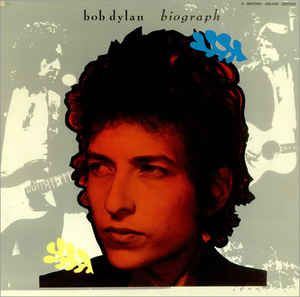 Lay, Lady, Lay
Baby, Let Me Follow You Down
If Not For You
I'll Be Your Baby Tonight Camp;The True Brethren
I'll Keep It With Mine

Quinn the Eskimo
Mr. Tambourine Man
Dear Landlord
It aint me Babe
You Angel You

To Ramona
You're a big Girl now
abandoned love
tangled up in blue
Its all over now, baby blue

Baby, I'm in the mood for you
I wanna be your lover
I want you
On a night like this
Just like a Woman


Biograph is more than just a retrospective; it is essential for any Dylanophile. While it indeed collects the majority of the essential tracks in Dylan's canon (Rolling Stone, Heaven's Door, Watchtower, I Want You, Blowin' In The Wind, etc.), classic album tracks (To Ramona, The Lonesome Death of Hattie Carroll, etc.), live and alternate take offerings (Visions, I Don't Believe You, It's All Over, etc.), and the best of the latter day tracks (Gotta Serve Somebody, Groom, Every Grain of Sand, etc.), what makes this set an essential for the hard-core (other than the revealing sequencing, which puts a whole new light on the material, and the deluxe packaging) is the generous smattering of previously unreleased material. Absolutely first-rate songs such as Percy's Song, Caribbean Wind, and Up To Me stand up well to his officialy released canon. This, along with Volumes 1-3 of The Bootleg Series, show that Dylan throws away tracks that any other artist would kill to have written. This release was so good, in fact, that it set the standard (and the pattern) for all box sets to come. It stands as a good primer for those new to Dylan, and also as an essential addition to the catalog of the fan who already has everything else.

Bob Dylan - Blowin' In the Wind