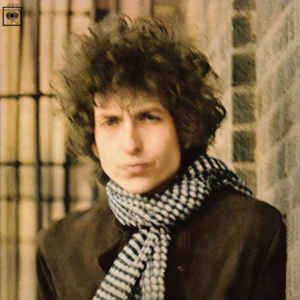 Tracklisting:
A1 Rainy Day Woman #12 & 35
A2 Pledging My Time
A3 Visions Of Johanna
A4 One Of Us Must Know (Sooner Or Later)


For the uninitiated, Blonde On Blonde is both the perfect start-up record and the ultimate challenge in the Dylan catalog. He distills the expansive surrealism he pioneered on the two groundbreaking albums that preceded (Bringing It All Back Home and Highway 61 Revisited) down to a thematic thread that runs throughout the record. As befits Dylan, however, the identity and meaning of this thread are a matter of both speculation and disagreement. You know it's there, you just can't explain it.


The two-record set featured the stoned celebration of "Rainy Day Women #12 & 35" and the sweetly engaging "I Want You", but it was for it's ballads--"Visions of Johanna", "Just Like a Woman" and the side-long "Sad Eyed Lady of the Lowlands"--that he drew forth the most dense, hypnotic music of his career, and poetry that overflowed not only with hypnotic wordplay but a depth of mood that language can rarely convey. Played by guitarist Robbie Robertson, the future leader of the Band, as well as by a group of ace Nashville studio musicians, the songs were hardly country songs, but the recording milieu certainly was--and it suggested the next turn Dylan might take..

The songs defy not only description but interpretation, despite inviting both at every turn. They burrow deep into the grey matter of the listener without detour; they are visceral rather than literal or even symbolic. The positively epic "Visions Of Johanna" has the effect of wrapping the listener in a warm, spangled word-veil of mystical psychedelia, the classic "Stuck Inside Of Mobile With The Memphis Blues Again" is a startling initiation into a shadow world of Dylan's creation, while "Most Likely You Go Your Way And I'll Go Mine" chugs along like a magical train.

Blonde On Blonde was recorded at the peak of one of many controversial periods in Dylan's career. He had recently shocked and alienated the folk audience that claimed him as their messiah by playing with an electric band at the Newport Folk Festival. Although the booing of the crowd was probably greatly exaggerated, the rumors of the reaction proved more than enough inspiration for similar, yet more intense audience response all throughout the 1966 tour. The resulting conflict between performer and audience was physically and mentally taxing for Dylan, but had the effect of galvanizing both his live performances and his recordings.

Ironically, Dylan produced his most cohesive album to date in the midst of a musical power struggle between his artistic alter egos; the folk messiah is here reconciled with the prophet who brought forth the bastard son of his own creation, the folk rocker. The overall sound achieved on Blonde On Blonde is so original and enjoyable that it utterly defies the classification his "fans" attempted to foist upon him (see sidebar) Dylan himself, in a 1978 interview, described the sound of the record in typically mystical fashion as "that thin, that wild mercury sound. It's metallic and bright gold, with whatever that conjures up..." The "wild mercury sound" must be heard to be understood. You won't be sorry.

Bob Dylan - Stuck Inside Of Mobile With The Memphis Blues Again