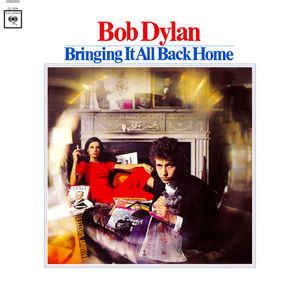 Bob Dylan - Bringing It All Back Home

B1 Mr. Tambourine Man
B2 Gates Of Eden
B3 It's Alright, Ma (I'm Only Bleeding)
B4 It's All Over Now, Baby Blue


By the time of this 1965 release, Dylan had already proven himself a lyrical master and a new legend in the folk universe. With his electrified performance at the Newport Folk Festival, and this half-electric/half-acoustic LP, he showed that he was not only far from done with pushing the envelope, but that he'd really only begun. In particular, his music and subject matter were now catching up to his revolutionary words and lyrical structures.

The album opens full-bore with the blistering word-puzzle "Subterranean Homesick Blues." Backed by a vamping electric blues band Dylan is at once a protesting outsider, a sardonic social critic, and a free-associating poet. It stands on it's own as an incredible piece of rock music, but as the introduction to Dylan's fifth LP it was something of a warning shot. The electric blues return for the near-rockabilly arrangement of "Maggie's Blues" and a Chuck Berry (ala "Memphis") styled "Outlaw Blues." In between, Dylan crafted extraordinary ballads, including the acidic "She Belongs to Me" and one of his best-ever love songs, "Love Minus Zero/No Limit."

Side two (tracks 7-11) retreats to mostly acoustic presentations, but even here Dylan expanded upon his earlier work with surreal stories like "Bob Dylan's 115th Dream" and the poetic folk-rock standard "Mr. Tambourine Man." The latter stretches to over 5-1/2 minutes and includes a trio of verses dropped by The Byrds in their hit cover. One of the album's most effective cuts is the 7-1/2 minute "It's Alright Ma, I'm Only Bleeding," a song Dylan had been performing live for several months before recording it. Though recorded with only an acoustic guitar, the venomous lyrics spare no target in their criticism, providing as much fire as any of the electric tunes on side one.

All in all, this is as good a portrait of Dylan's inventions as can be found. It's a showcase for his brilliant writing, his evolving musical exposition and his ability to parlay his unconventional voice into some of the world's most expressive and effective vocals

The Iconic Opening Of The 1965 Bob Dylan Documentary Don't Look Back With Bob In An Alley Holding Up Sign's As Subterranean Homesick Blues Plays In The Background.