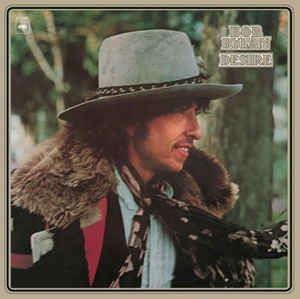 Label:
We Are Vinyl / Columbia ‎–

..Dylan shows an unlikely innocence and a greater sense of the world around him on this 1976 follow-up to the more cynical and introspective Blood on the Tracks. Working with lyricist Jacques Levy, Dylan offers a work with rougher edges and greater urgency that is distinguished by the prominence of Scarlet Rivera's melancholy violin and Emmylou Harris's bare harmonies.
, two of which quickly generated controversy: the 11-minute-long "Joey", which is seen as glorifying the violent gangster "Crazy Joey" Gallo, and "Hurricane", the opening track that tells a passionate account of the murder case against boxer Rubin Carter, whom the song asserts was framed. Carter was released in 1985, after a judge overturned his conviction on appeal.
Exotic imagery meshes with simple melody on "Isis," one of Dylan's most appealing rambles. The droning piano and plodding drums propel a mystical journey that contains some of his most insightful (and most ridiculous) lyrics about paranoia, trust, betrayal, and, of course, desire. ("What drives me to you is what drives me insane.")
In the end Dylan shows no signs of being jaded by love's fickleness. Delicate and heartbreaking, the finale "Sara" is a gift to his ex-wife that eloquently recounts the wonders of a relationship, perhaps in an attempt to revive it.
More Information
Please sign in with your email address or Create an Account.
New Products
Compare Products
Compare
Clear All
You have no items to compare.
My Wish List
Last Added Items
Go to Wish List
You have no items in your wish list.
Vinyl Records Vancouver
Categories
Help
Quick Link
Newsletter