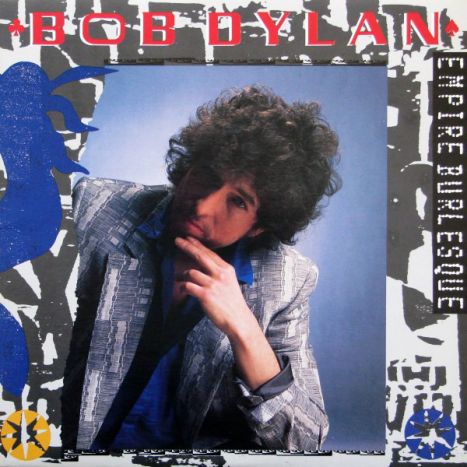 Empire Burlesque has one thing in common with Self Portrait, Street Legal and every other Bob Dylan album that is panned more often than not: If it had been released by an little known upstart, it would have been accepted, maybe even acclaimed. The expectations are so perennial high for Dylan to produce another Blood on the Tracks that average, decent or even good albums he releases are often condemned to a negative responce because they do not stand-up to his highest accomplishments.
Empire Burlesque rattles the expectations critics continuously hold for Dylan in two specific ways: 1) Instead of poetry, it features mostly simple, straight-forward rock lyrics. 2) Instead of an unadorned, organic feel, it possesses a slick, well-produced atmosphere. Although, we all would prefer another "Gates of Eden" or "I Shall Be Released," the love and relationship-centered songs of Empire Burlesque are nothing to scoff at. Clever, true and free of clichés that would trap lesser songwriters, songs such as "Tight Connection to My Heart," "I'll Remember You" and "Emotionally Yours" are excellent representations of Dylan's more pop-orientated prowess. Granted, the thick production and hefty accompaniment are a bit much. Every song on Empire Burlesque, with the exception of the gorgeous finale, "Dark Eyes," which Dylan performed unaccompanied, could have benefited from being giving some breathing room with the elimination of one or a few back-up vocals or instruments. A complete stripping, however, would rob the album of the instances in which such sonic density work. On "Something's Burning Baby," the heavy accompaniment, especially Anton Fig's jangling drums, bolsters the song's sense of power and urgency and on the spicy "Clean Cut Kid," Dylan mirrors the success of the large ensemble with which BB King usually plays. Although far from perfect, Empire Burlesque is a fine addition to Dylan's discography.

This song sounds similar to the traditional English Christmas carol titled "The Holley and the Ivey."

It's the stunning closing track from Empire Burlesque, one of the 3 great albums Dylan released in the 80's. The other 2 : Infidels and Oh Mercy. The album arrangement of Dark Eyes is simple, beautiful: voice and guitar. You should check it out.