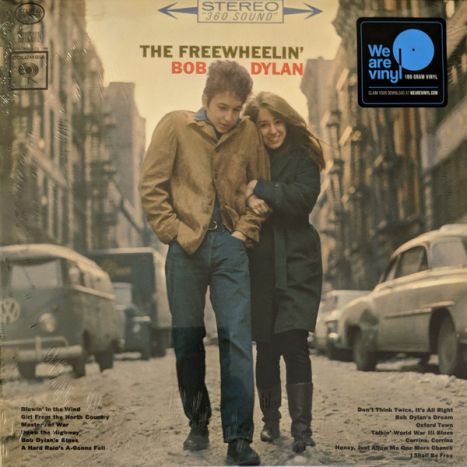 Bob Dylan is one of the true genius of music. He is probably the greatest songwriter of all time, releasing an uncanny amount of albums. He has so many, they are hard to keep up with. Although it is true, The Freewheelin' Bob Dylan is one of his most essential albums. It is the best example of the Early Dylan.
After Bringing It All Back Home, most of Dylan's albums were more like rock than folk. Also, they were electric, for the most part. This album, however, is before "Dylan Went Electric."

Personally, I love the Electric Dylan. However, I equally love the Acoustic Folk Dylan, which is exactly what this album is.

Actually, it may be too different to be a folk record, but it definately closer to folk than Rock.

Blowin' In The Wind is as classic of a song as they come. It is very much a folk song. It is one of the best on the album. Girl From The North Country is another briliant song, and is also redone greatly on Nashville Skyline.

Masters of War is a true early Dylan protest song.

Bob Dylan's Blues is the first of many songs like it to come. Bob Dylan Blues is actually a completely different style of music. It is like Folk Blues.