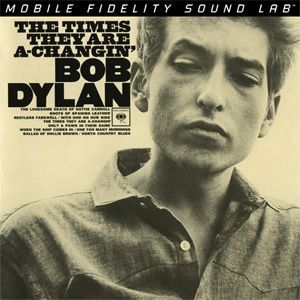 
Immediately distinguished by the you're-either-with-us-or-against-us messages of the landmark title track, Bob Dylan's The Times They Are A Changin' sounds an unmistakable clarion call on behalf of progress and its unstoppable advancement. One of the Bard's trademark songs, it remains a timeless anthem with a clear sense of common purpose, a musical line in the sand that helped unite various social movements and multiple generations. The reverential 1964 record feeds off the opening tune and its unmistakable sentiments, marching forward to confront racism, poverty, injustice, and upheaval in a stark, immediate manner unlike few albums before or since.

Mobile Fidelity Sound Lab has been the undisputed pioneer and leader in audiophile recordings since the company's inception in 1977. Established by dedicated audiophiles, Mobile Fidelity's first and foremost goal was to offer faithfully reproduced high fidelity recordings that would compliment the numerous advances occurring in audio delivery systems. Throughout its history, Mobile Fidelity has remained true to this goal, pioneering state-of-the-art technologies and setting audiophile standards that remain in place today.

Alongside the companys launch in 1977 came the half-speed mastered Original Master Recording LP. As part of the company's resolve to provide the most accurate sonic reproductions possible, all Mobile Fidelity product is mastered directly from the original master tape as opposed to production copies often used for mass reproduction. This ensures a more complete and exacting transfer of the original musical data. In the case of the Original Master Recording (OMR) LP, the use of the master tape is combined with a unique procedure known as "half-speed" mastering, which literally slows down the cutting system involved in mastering vinyl so that musical information can be transferred from the source tape to the lacquer with greater precision. To this advanced mastering technique, Mobile Fidelity adds substantial refinements in the vinyl compound itself and improves methods of plating the lacquer. The result is a playback of phenomenal quality, which is still a benchmark for modern audiophile labels today.


One of the darkest of Dylan albums, Times is the work of a 22-year-old who sounds no less sick of it all than the ailing 55-year-old who made Time out of Mind. There's a place here for rousing protests such as the title track and "When the Ship Comes In," but those songs are outnumbered by the equally powerful, drainingly pessimistic likes of "Only a Pawn in Their Game," "The Lonesome Death of Hattie Carroll," and "The Ballad of Hollis Brown." It's as if Dylan had to deliver his grimmest topical material before moving on to Another Side's liberation and laughs. --Rickey Wright

Bob Dylan's first collection to feature only original compositions. The album consists mostly of stark, sparsely-arranged story songs concerning issues such as racism, poverty, and social change. The title track is one of Dylan's most famous; many felt that it captured the spirit of social and political upheaveal that characterized the 1960s.

The Times They Are a-Changin' entered the United States chart at twenty, eventually going gold, and belatedly reaching four in the United Kingdom in 1965.

The words of this outstanding song (yes, based on a true story) are brilliant.


Bob Dylan - With God On Our Side

The lyrics generally address the notion of humans that God or some other higher power(s) invariably sides with them and opposes those with whom they disagree, and thus they don't question the morality of wars fought and atrocities committed by their country. Dylan mentions various wars and events from United States and world history, including the slaughter of Native Americans in the nineteenth century, the Spanish-American War, the American Civil War, World Wars I and II, the Holocaust, the Cold War, and the betrayal of Jesus Christ by Judas