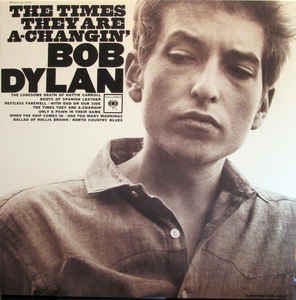 Bob Dylan ‎– The Times They Are A-Changin'

One of the darkest of Dylan albums, Times is the work of a 22-year-old who sounds no less sick of it all than the ailing 55-year-old who made Time out of Mind. There's a place here for rousing protests such as the title track and "When the Ship Comes In," but those songs are outnumbered by the equally powerful, drainingly pessimistic likes of "Only a Pawn in Their Game," "The Lonesome Death of Hattie Carroll," and "The Ballad of Hollis Brown." It's as if Dylan had to deliver his grimmest topical material before moving on to Another Side's liberation and laughs. --Rickey Wright

Bob Dylan's first collection to feature only original compositions. The album consists mostly of stark, sparsely-arranged story songs concerning issues such as racism, poverty, and social change. The title track is one of Dylan's most famous; many felt that it captured the spirit of social and political upheaveal that characterized the 1960s.

The Times They Are a-Changin' entered the United States chart at twenty, eventually going gold, and belatedly reaching four in the United Kingdom in 1965.

The words of this outstanding song (yes, based on a true story) are brilliant.

Bob Dylan - With God On Our Side

The lyrics generally address the notion of humans that God or some other higher power(s) invariably sides with them and opposes those with whom they disagree, and thus they don't question the morality of wars fought and atrocities committed by their country. Dylan mentions various wars and events from United States and world history, including the slaughter of Native Americans in the nineteenth century, the Spanish-American War, the American Civil War, World Wars I and II, the Holocaust, the Cold War, and the betrayal of Jesus Christ by Judas