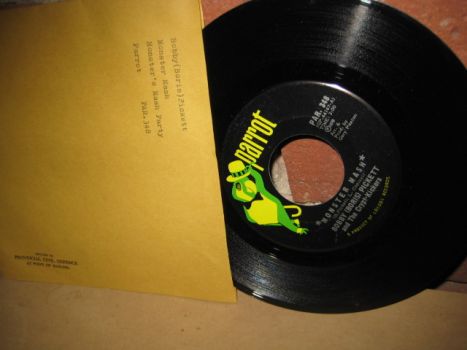 "Monster Mash" is a 1962 novelty song and the best-known song by Bobby "Boris" Pickett. The song was released in October 1962 along with a full-length LP called The Original Monster Mash, which contained several other monster-themed tunes. The "Monster Mash" single reached number one on the Billboard Hot 100 chart on October 20 of that year, just in time for Halloween. It has been a perennial holiday favorite ever since.

Pickett was an aspiring actor who sang with a band called The Cordials at night while going to auditions during the day. One night, while performing with his band, Pickett did a monologue in imitation of horror movie actor Boris Karloff while performing The Diamonds' "Little Darlin'". The audience loved it and fellow band member Lenny Capizzi encouraged Pickett to do more with the Karloff imitation.

Pickett and Capizzi composed "Monster Mash" and recorded it with Gary S. Paxton, Leon Russell, Johnny McCrae, Rickie Page, and Terry Berg, credited as "The Crypt-Kickers". The song was partially inspired by Paxton's earlier novelty hit "Alley Oop", as well as by the Mashed Potato dance craze of the era. A variation on the Mashed Potato was danced to "Monster Mash", in which the footwork was the same but monster gestures were made with the arms and hands. Mel Taylor, drummer for The Ventures claimed to play on this, and that fact is repeated many places, including Taylor's N.Y. Times obituary.

The song is narrated by a mad scientist whose monster, late one evening, rises from a slab to perform a new dance. The dance becomes "the hit of the land" when the scientist throws a party for other monsters. The producers came up with several low-budget but effective sound effects for the recording. For example, the sound of a coffin opening was imitated by a rusty nail being pulled out of a board. The sound of a cauldron bubbling was actually water being bubbled through a straw, and the chains rattling were simply chains being dropped on a tile floor. Pickett also impersonated horror film actor Bela Lugosi as Dracula with the lyric "Whatever happened to my Transylvania Twist?"